The best snorkeling spots in the Galapagos 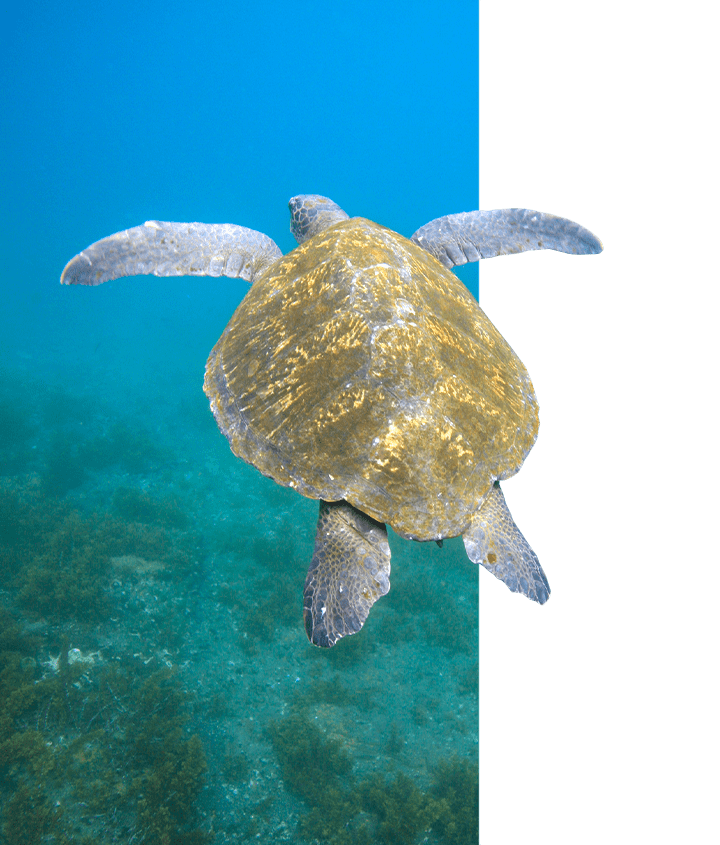 Snorkeling at Chinese Hat provides one of the best opportunities in the archipelago to see Galapagos Penguins, Sea Lions, Reef Sharks and Green Sea Turtles all in one spot. Sea Lion pups swim in a cove that is secluded around the Chinese Hat where they are protected from predators and from the waves, while their mothers are out at sea looking for food. You will also have a chance to swim and play with these sea lions as they maneuver like torpedoes around the underwater rock formations and perform loops and blow bubbles to amaze the snorkeling spectators. You will also have a chance to swim with zig-zagging penguins that are chasing small schools of fish, as well as with Green Sea Turtles that are slowly cruising the same waters in search for an algae bed to feed on. White-tip reef sharks are also commonly spotted here as they oxygenate their blood by slowly cruising around the sandy bottom. 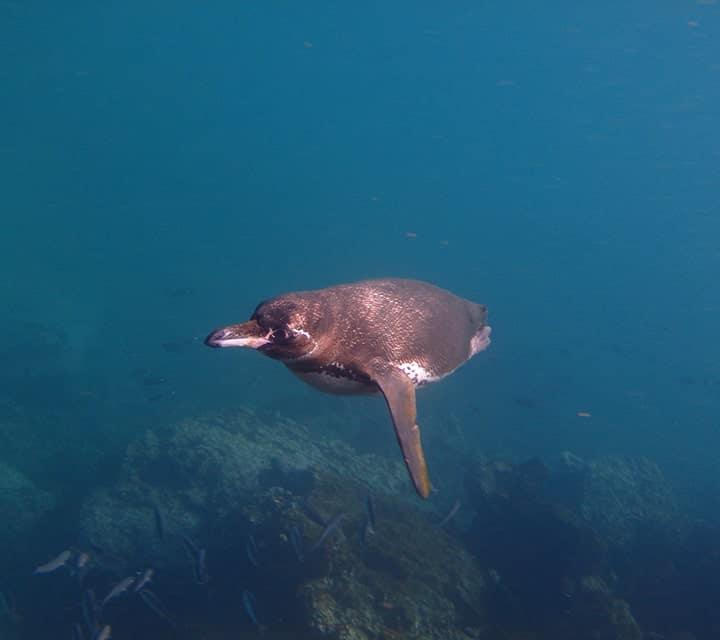 Isla Lobos is named for the sea lions that inhabit its shores and following a short walk around the island visiting these friendly creatures, it is time to swim with them. A protected cove is found off the western side of the island, cut off from the ocean except for a small inlet. This makes for very calm waters in this site and a white sandy bottom. There isn't much to see apart from the sea lions, but here, they are the main attraction and they always steal the show! The water is very clear here, so you can often spot the solitary king of the pack submerged below, but prepare yourself for all sorts of playful and unexpected behaviors from the young ones. 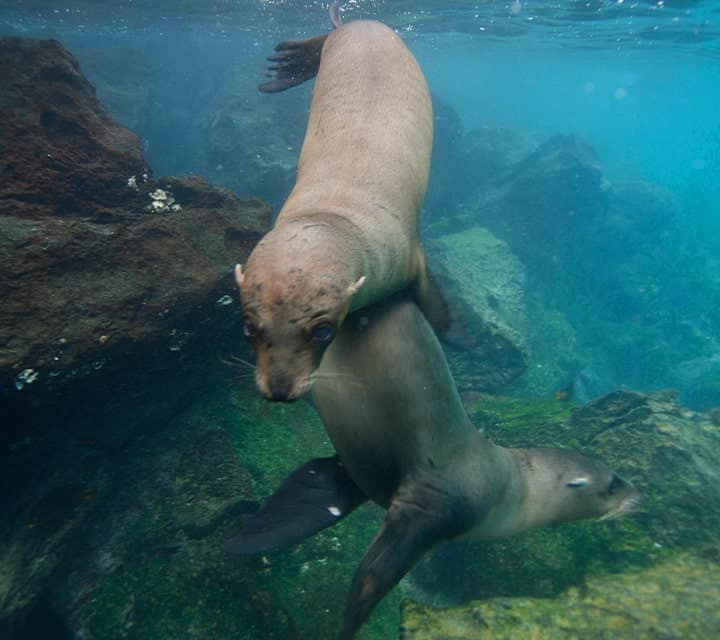 These young creatures have been known to sneak up behind unwary snorkelers, leap in the air and then bullet down right in front of the startled swimmers! They also love to swim up toward your mask, stop just a few inches short and blow bubbles in your face. All who snorkel here immediately fall in love with these friendly animals!

A seismic event that happened in the past formed North Seymour Island by lifting it from the Ocean floor. Its origins as a seabed give the island its flat and low profile. North Seymour is one of the most common snorkeling sites in Galapagos to spot White-Tip Reef Sharks cruising below in the shallow waters or sleeping in the sandy bottom. There are very few currents in this area, making Galapagos Islands Snorkeling great around the low cliffs that border this small island. This makes for a very enjoyable and easy snorkeling experience where one commonly spots king angelfish, box fish, black-blotched rays, damselfish, hogfish, parrotfish and sea lions. 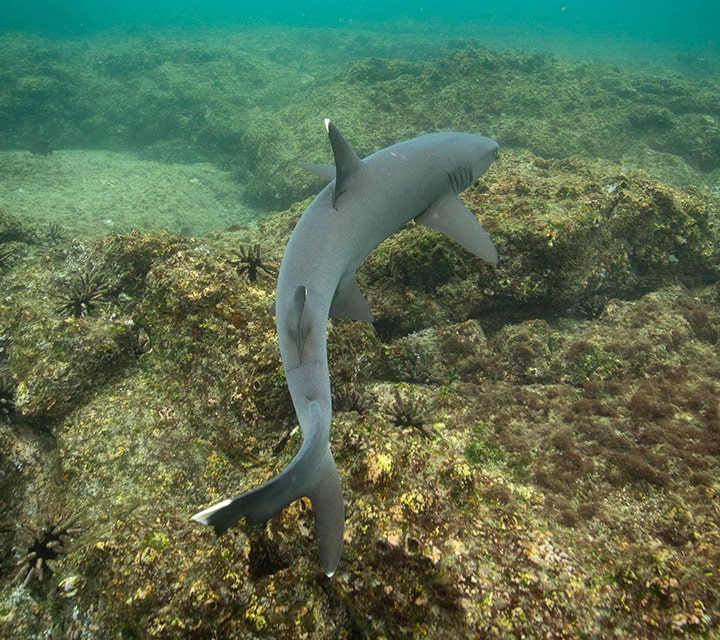 James Bay on Santiago Island is a snorkeling site that you access from the shore instead of a dinghy. This fact alone makes it very different from other sites in Galapagos. While ashore you will notice that Santiago Island has a fair number of both California sea lions and fur sea lions, and if you are lucky, at James Bay you can spot both species while snorkeling. The black sandy beach slopes off into a rocky bottom where crowds of green sea turtles enjoy hiding and grazing by blending in with the rocks. However, these dark rocks move and will swim right up to you! Galapagos penguins are also common visitors here and at certain times of the year, large schools of spotted and golden rays can be seen gliding by. 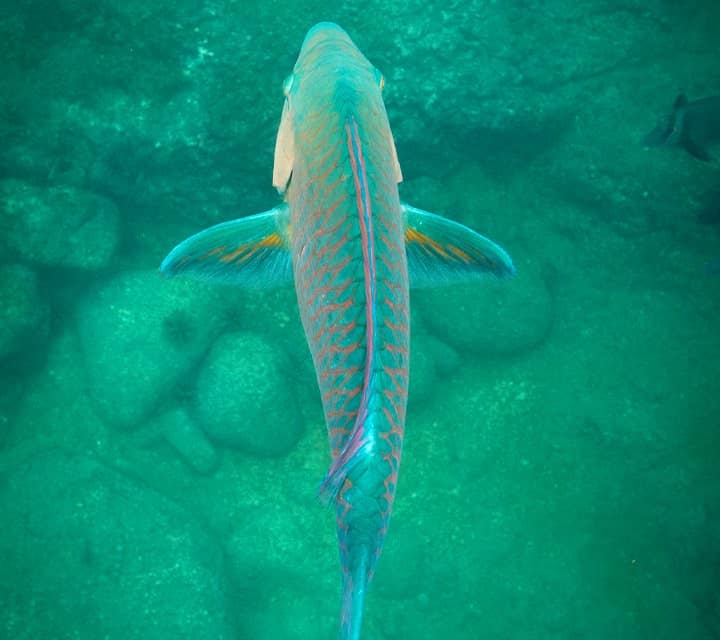 An aerial view of Isabela Island reveals its shape as a seahorse, and Punta Vicente Roca is found on the northwestern part of the island, right at the seahorse's mouth. Here the remains of an ancient volcano form a bay well protected from the ocean swells and two beautiful turquoise coves. In this part of Galapagos, the upwelling of cold water from the Humboldt Current gives rise to an incredible abundance of marine life which, in combination with the protected turquoise coves, make Punta Vicente Roca one of the most sought after snorkeling spots in the archipelago, but also one of the coldest. Frogfish, moonfish, hinge beak prawns, sea horses and the famous red-lipped batfish await snorkelers here! Pacific green sea turtles are often found sleeping on makeshift beds formed by ledges, as sea lions make a sport of darting in and out of your range of view. The rare Port Jackson shark is also a frequent visitor and often spotted drifting by. 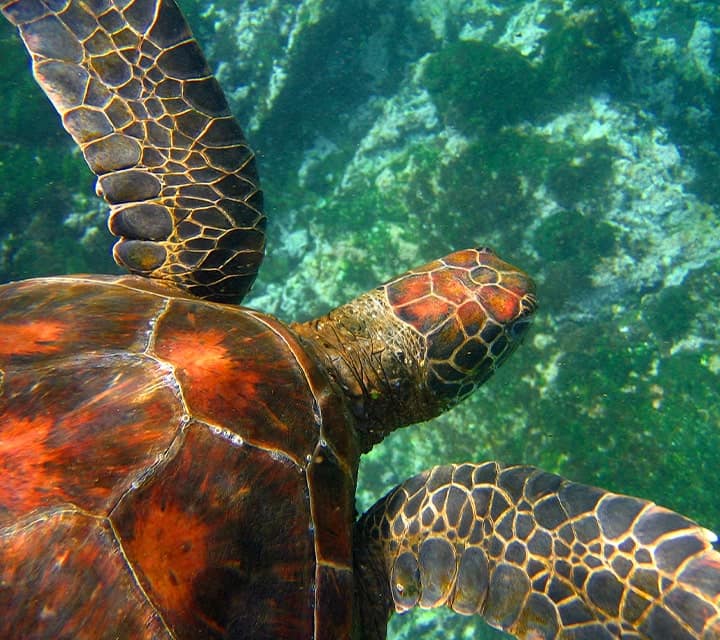 The Island of Bartolome's most famous landmark is Pinnacle Rock, a towering spearheaded obelisk that rises from the ocean's edge and is one the best-known landmarks in all of Galapagos. A dreamily crescent, white and pink sandy beach lies just to the east of the pinnacle. The beach is used as a nesting site for green sea turtles and they can often be seen swimming beneath 'the rock'. Galapagos penguins - the second smallest penguin in the world and the only species of penguin found north of the equator - walk unstably along thin volcanic ledges where sea lions are often found sleeping. 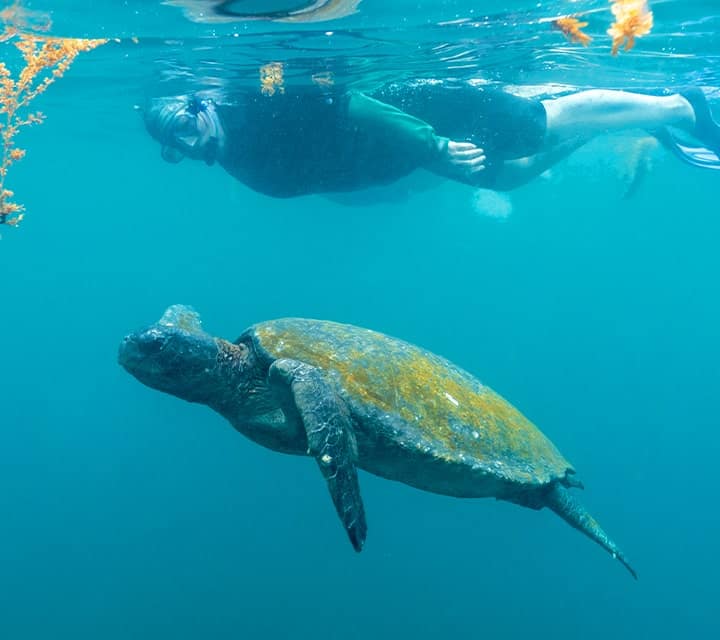 The island of Floreana has a very rich and colorful history that encompasses whalers, convicts, pirates and a group of colonists who chose a Robinson Crusoe-like way of life. Just north of Punta Cormorant (also on Floreana Island) is a worn down, old submerged volcanic cone. The eroded crater walls form a frequent roosting site for seabirds including pelicans and red and blue-footed boobies. Be ready for a true ride when you snorkel here! Devil's crown has a great feature for snorkeling, which is the prevailing current that takes you inside and around the crown. You feel like you are on a theme park ride where the current does all the work! Because of its sheltered waters, Devil's Crown is home to numerous marine species that make for one of the best snorkeling sites in the Galapagos. 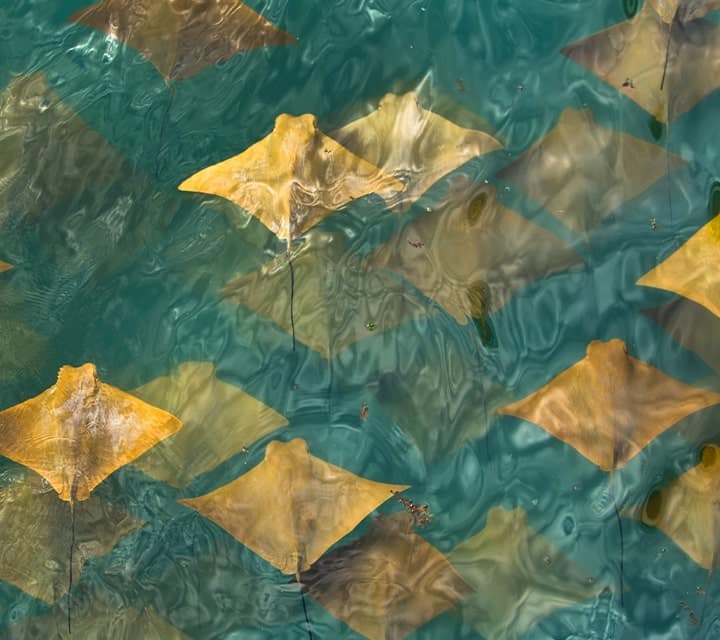 These species include moray eels, a wide variety of corals, pencil sea urchins, wrasses, snappers, groupers, angelfish, amberjacks, yellow-tailed grunts, scorpion fish and many other interesting creatures. As with many snorkeling sites in Galapagos, you can expect visits from sea turtles and sea lions. It is also a great place to see schools of golden and spotted eagle rays.

Far northwest of the Galapagos archipelago, about 150km (90 miles) from the main port of Puerto Ayora, we find Tower Island (Genovesa in Spanish). The southwestern part of the island is formed from a submerged caldera, partially opened and flooded. There is a deep part of this caldera located right at the center where large manta rays and hammerheads are frequent visitors. These fish sometimes swim close to the more open western edge of the caldera. Tower Island offers two very distinct snorkeling spots along the cliffs that form the inner part of the caldera. Snorkeling here is great as you gaze down into the depths to spot large fish. 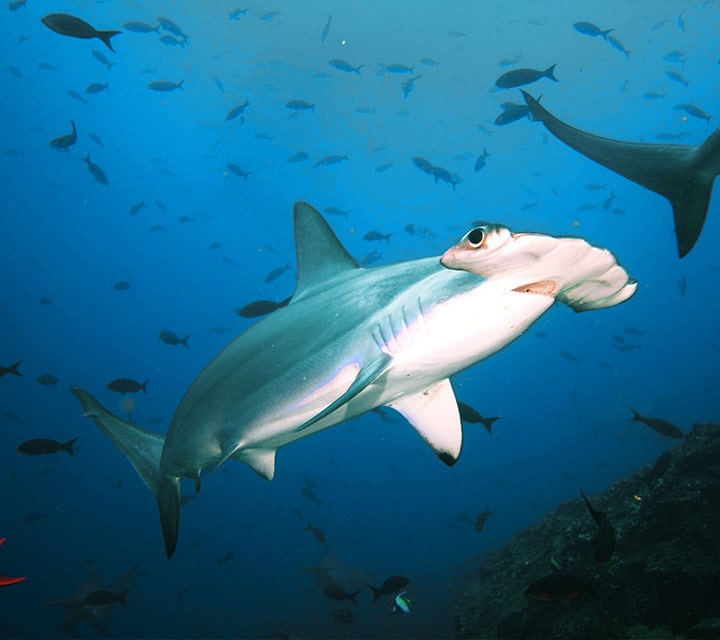 Another great spot is found on the eastern side of the caldera near Prince Phillip's Steps. This site was named for the British Monarch for a visit he made here a long time ago. Warm water fish feeding off of the cold water nutrients are very commonly seen here along with many other large tropical fish. There is a huge assortment here, which includes oversize angel, parrot, unicorn and hogfish, along with schools of surgeonfish, perch and several varieties of butterfly fish. The rocky shoreline that drops off into the caldera is also a great place to spot a rainbow assortment of hiding wrasse, anthias, tang and basslet. If you have an underwater tropical fish identification chart, this is the place to bring it.

When you plan to go snorkeling you normally do not think of green pastures, but that is precisely what you will find just off Isabela Island at Tagus Cove. A carpet of green algae conceals the cove's floor, which gives snorkelers the impression of an underwater pasture. You can often spot sea turtles and marine iguanas grazing the algae. Marine feathered friends are also common while snorkeling here including Galapagos penguins and the rare flightless cormorant. This is one of the best snorkeling sites in the island as a result of the cove opening to the nutrient-rich waters of the Bolivar Channel. For those who can hold their breath long enough, a special reward of camouflaged creature awaits at a depth of 3 meters (15ft). These include sea horses masquerading as branches of the seaweed waving in the currents, the rare Port Jackson shark, and rockfish nestled against the outcrops. 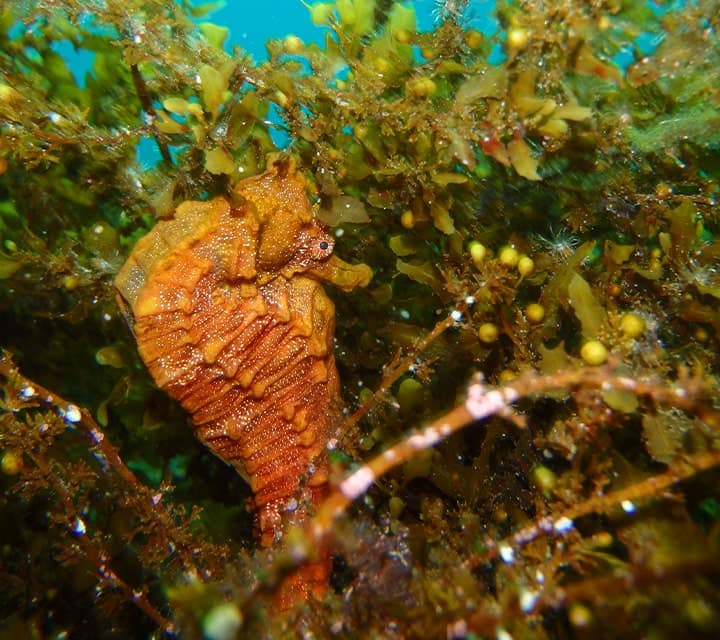 Punta Espinosa, on the western side of Fernandina Island and right on the Bolivar Channel, offers some real treats. Galapagos Penguins, Sea Lions, Flightless Cormorants, Marine Iguanas and Sea Turtles all await you when snorkeling the waters off this site. This Channel is the best place in Galapagos to spot whales and Galapagos dolphins. Often guests are able to swim with dolphins, see orcas & humpback whales and even kayak with pilot whales. 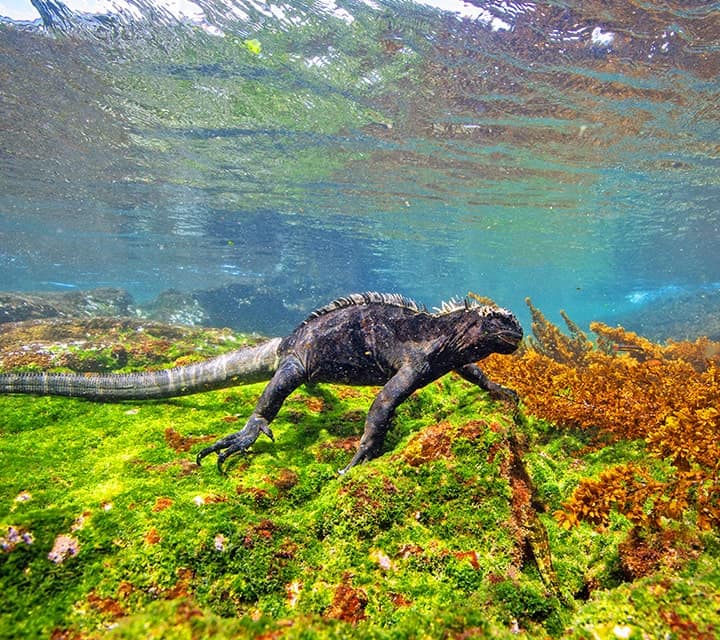 The ocean bottom at Punta Espinosa has a key feature which are the troughs formed by ocean currents and volcanic rock. Since the waters that reach out into the Bolivar Channel can be quite cold, sea turtles and marine iguanas enjoy hanging out in the warmer waters of the channel formed by these troughs. You are almost guaranteed sights of marine iguanas swimming back and forth between their colonies on shore and the underwater grazing areas. If you are lucky, you spot Galapagos penguins darting by or flightless cormorants showing off their swimming abilities.