The Galapagos Marine Iguana is abundant in the shore zone on all the islands of the archipelago. There are seven subspecies recorded: albemarlensis (Isabela Island); cristatus (Fernandina Island); hassi (Santa Cruz Island); mertensi (San Cristobal Island and Santiago Island); nanus (Tower Island); sielmanni (Pinta Island); and venustissimus (Hood Island). The total population is estimated to a number of 250,000.

Identification:
The Galapagos Marine Iguana is large and dark with variable coloration. Distinguished from the land iguanas by the flattened, rather square nose, an adaptation for feeding on marine algae, and by the laterally flattened tail, an adaptation for swimming. ADULT MALE: Male marine iguanas have a row of long spines on head an along back and tail. Variable pattern on body which ranges from red and black (venustissimus on Española), through green, yellow and black (albemarlensis on Isabela), to predominantly dark sooty-grey (cristatus on Fernandina). During the mating season assumes a considerably brighter coloration. ADULT FEMALE / JUVENILE: Female marine iguanas are much smaller than adult males and wholly dark, with ridge of short spines along back and tail.

Behavior:
Marine iguanas are found predominantly along rocky shores, females or immatures often basking together in large numbers. The only marine lizard in the world, feeding on marine algae either obtained from the splash zone or by diving close to the shore, can spend up to 1 hour underwater. Sometimes climbs trees or cacti to bask in the sun. Strongly territorial, particularly during the breeding season. Male mare iguana shakes head rapidly up and down and exhales loudly when agitated. Marine iguanas breed from November to December. Male marine iguanas take up to eight years to reach sexual maturity. 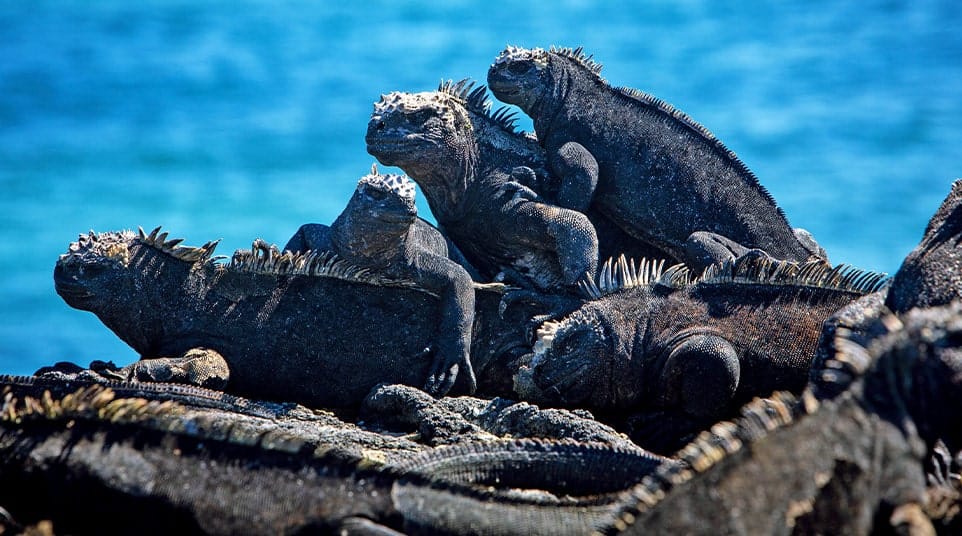