About Santiago Island in the Galapagos

Outstanding characteristics: Santiago Island has a volcanic landscapes and it is common to sea fur seals, flamingos and hawks.

Vegetation: Santiago Island has almost all the vegetation zones, from arid to humid, but they have been seriously affected by intense browsing of introduced goats.

Geology: Santiago Island offers numerous scoria and tuff cones; extensive recent lava flows on the east and south of the island. One major volcano dominates the western side, which is thickly vegetated and highly eroded.

Just across a narrow channel west of Bartolome Island lies Sullivan Bay on Santiago Island. This landing offers one of the most outstanding volcanic sites in the Galapagos. Just over a century ago, the island gave birth to a field of lava called pahoehoe (“rope-like” in Hawaiian), which gleams like a gigantic obsidian sculpture. It is stirring to imagine the once-molten lava lighting up the earth, flowing into the sea and sending plumes of superheated steam skyrocketing into the air. The flow gave birth to new land as it engulfed vegetation, leaving some plants forever etched into the earth.

Today the flow stands as a gallery of abstract shapes resembling braids, curtains and swirling fans. Brightly colored “painted locusts” and “lava lizards” punctuate the black volcanic canvas, as does the occasional finger of lava cactus and spreading carpetweed. Looking back across the bay from the source of the flow, a cinder cone of reddish lava, you are treated to a view of Pinnacle Rock nearby Bartolome Island.

On the northwestern side of Santiago Island is James Bay, which offers access on a Galapagos cruise to three unique sites, Puerto Egas, Salt Mine and Espumilla Beach. The first landing, Puerto Egas is the most visited area and begins with a wet landing on a black beach. With intriguing eroded rock formations inland, the trail crosses the dry interior eastward and continues along the shore line where two different types of lavas merge into unreal scenery. There we find the so called Fur seal Grottos, the only place during your visit that allows you to see these beautiful marine mammals during a land excursion. Darwin describes his visit to Santiago Island and James Bay in Voyage of the Beagle.

From the black beach at Santiago Island it is possible to experience one of the most exuberant snorkeling sessions during your visit. 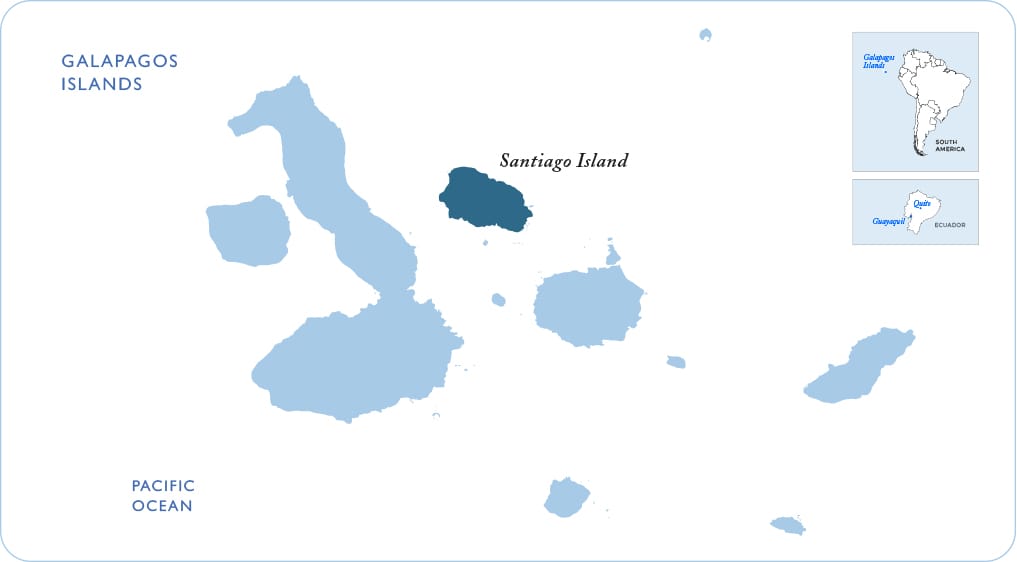