About Fernandina Island in the Galapagos

Vegetation: The predominant vegetation in the Arid Zone is concentrated in “kipunkas” (small areas left untouched by recent lava). The southern and eastern summit has vegetation of the Humid zone. Near the coast there are extensive mangrove concentrations.

Geology: Consists of a central volcano and calderas, numerous parasitic cones on the flanks, extensive lava fields and a few vegetated areas. It is one of the youngest volcanoes of the archipelago and the world.

Fernandina Island is the youngest and westernmost island in the Galapagos which we visit on all our Galapagos cruises. It sits across the Bolivar Channel opposite to Isabela Island. The only visitor site is Punta Espinosa, a narrow spit of land in the northeast corner of the island, where a number of unique Galapagos species can be seen in close proximity. As the panga driver skillfully navigates the reef it is not unusual to see penguins swimming nearby the dinghy. Red and turquoise-blue zayapas (Sally lighfoot) crabs disperse across the lava shoreline, while herons and egrets forage among the mangrove roots.

The landing at Punta Espinosa is a dry one, set in a quiet inlet beneath the branches of a small mangrove forest. A short walk through the vegetation leads to a large colony of marine iguanas - a schoolyard of Godzilla's children - resting atop one another in friendly heaps along the rocky shoreline, sneezing out saline water to clear their bodies of salt. Nearby , sea lions frolic in the sheltered coast line. This is one of the few places you can glimpse iguanas grazing on seaweed underwater and above!

Dominating this landscape of Fernandina Island is La Cumbre volcano. At 1495 meters ( 4,858 feet ), it is one of the most active volcanoes in the world, reporting seven eruptions from its 6-kilometer-wide caldera (mouth) since 1968. Along the coast line, the world's only species of flightless cormorants have established their colony near an inviting inlet frequented by sea turtles. Because these birds evolved in Fernandina Island without land predators — it was easier to feed on the octopuses, eels and fish found in the ocean — the cormorants progressively took to the sea. They developed heavier, more powerful legs and feet for kicking, serpent-like necks and wet, fur-like plumage. Their wings are now mere vestiges. Back toward the landing and farther inland, the Fernandina Island's black lava flows become more evident, forming a quiet, inner lagoon. Galapagos hawks survey the seascape from overhead. 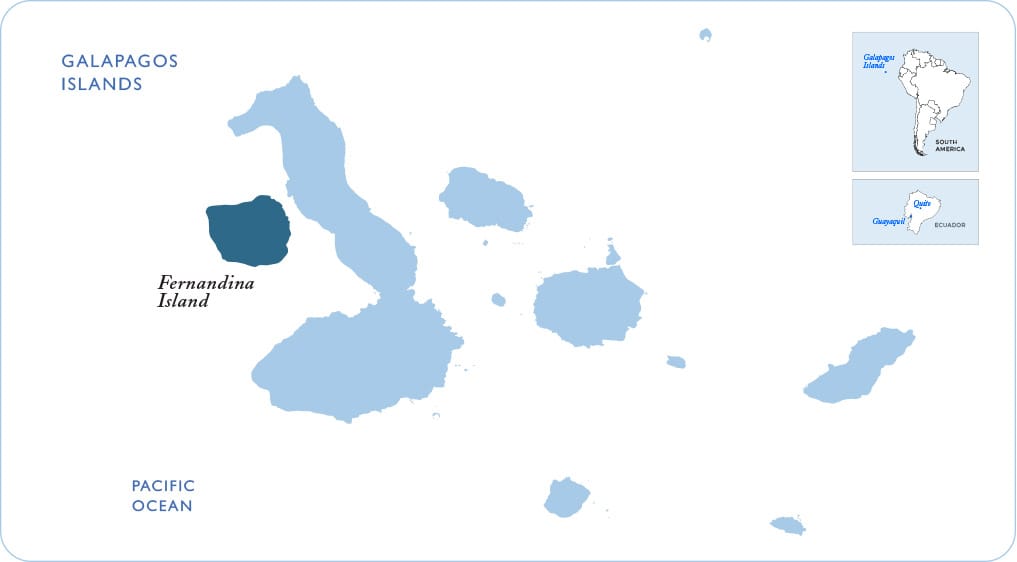