About Isabela Island in the Galapagos

Vegetation: It is very dense in the highlands of the southern part of the island and it is abundant in other areas which are exposed to the southeast trade winds.

Geology: This Island is formed by 5 relatively young volcanoes and one, which is very eroded, called Ecuador Volcano. The volcanoes Wolf, Cerro Azul, Alcedo and the northwestern flanks of Sierra Negra have sporadic activity. The northern volcanoes have extensive fields of lava and very little vegetation with the exception of the humid and protected areas.

Isabela Island is the largest island in the archipelago, accounting for half of the total landmass of the Galapagos at 4,588 square kilometers. Though narrow in places, the island runs 132 km from north to south, or 82 miles. Isabela Island is formed from six shield volcanoes that merged into a single landmass. It is also home to the highest point in the Galápagos, Wolf Volcano at 1707 meters (5,547 feet), and calderas of up to 10 kilometers (7 miles) across.

Located in the south of the north western most point of Isabela Island is Punta Vicente Roca. On the map, this place looks like the head of a sea horse. Here the remnants of an ancient volcano forms a cove with a bay well protected from the ocean swells. The spot is a popular anchorage from which to take dinghy rides along the cliff where a partially sunken cave beckons explorers. Nazca and blue-footed boobies as well as brown noddy terns perched along the point and the sheer cliffs, while flightless cormorants inhabit the shoreline. The upwelling of coldwater currents in this part of the Galapagos produce an abundance of marine life which, in combination with the protection of the coves, makes Punta Vicente Roca one of the archipelago's most interesting dive spots where Galapagos sharks and many other sharks are often spotted. This place is good to practice some kayaking. The entire area of Punta Vicente Roca lies on the towering flank of 2,600 foot Ecuador Volcano. This is the island's sixth largest volcano. Half of Ecuador Volcano slid into the ocean leaving a spectacular cutaway view of its caldera.

On the way south of Isabela Island, to Tagus Cove, you will sail through the Bolivar Channel on your Galapagos cruise. These are the coldest, most productive waters in the Galapagos, the upwelling of the rich Cromwell current makes for frequent sightings of dolphins and whales in the area. Tagus Cove, named for a British naval vessel that moored here in 1814, was used historically as an anchorage for pirates and whalers. One can still find the names of their ships carved into the rock above our landing, a practice now prohibited, of course. The cove's quiet waters make for an ideal dinghy ride beneath its sheltered cliffs, where blue-footed boobies, brown noddies and pelicans nests. Flightless cormorants and penguins inhabit the lava ledges near the ocean.

From our landing, a wooden stairway rises to the trail entrance for a view of Darwin Lake , a perfectly round saltwater crater, barely separated from the ocean but above sea level! The trail continues around the lake through a dry vegetation zone and then climbs inland to a promontory formed by spatter cones. The site provides spectacular views back toward our anchorage in the bay, as well as Darwin Volcano and Wolf Volcano farther to the north.

Urbina Bay is directly west of Albemarle Island's Alcedo Volcano, where we will make a reasonably easy wet landing (a hop into a few inches of water except when the shore line is rough) onto a gently sloping inorganic beach. In 1954, a Disney film crew caught sight of this gleaming white strip, and on further investigation found pools of stranded sea creatures! To their astonishment, three miles (5 km) of the marine reef had been uplifted by as much as 13 feet (4 meters) in moments. Now visitors can walk amongst the dried coral heads, mollusks and other organisms that use to form the ocean floor. A highlight of this excursion is tracking down the very large land iguanas that live in the area, whose vivid and gaudy yellow skin suggests that dinosaurs may have been very colorful indeed. Giant tortoises inhabit this coastal plain during the wet season, before migrating to the highlands when the lowlands turn dry. Our landing beach also provides opportunities to snorkel amongst marine creatures, or just relax on the beach. Here we must take care not to step on the sea turtle nests, which are dug carefully into the sand.

Puerto Villamil has a feeling of standing on the edge of the earth. The tiny fishing village, founded in 1897 by Don Antonio Gíl, is something of a forgotten gem in the islands. It has a population of roughly 2,000 people and is set amidst miles of white sandy beaches that rest at the outer edge of 4,452 ft . ( 1370 m ) Sierra Negra Volcano.

Buried pirates treasures has been unearthed here some years ago in the shadow of a tall coconut palm, thereby giving credence to all the legends of hidden treasure buried beneath palm trees. It's possible to travel to the highlands by bus, from the base of the volcano to the Park Service post, from where we can have a 2 hour hike on fairly steep terrain to the rim of the volcano. Measuring 10 km across, the caldera is the third largest in the world after Ngorongoro in Africa and Caldera Las Cañadas in the Canarias. At the rim we have some spectacular views of the caldera, the island and the surrounding Pacific. We continue hiking for another 45 minutes to the sometimes active cone of Volcan Chico. This is a parasitic cone that protrudes from the northern side of the volcano. The most recent eruption with lava flows and fumaroles occurred in October 2005 and gave evidence of the birth and continued growth of the islands. In the afternoon we'll return to Puerto Villamil. Along the way we will visit a breeding station for the endemic giant tortoise lead by the National Park Service as well as a hyper-saline lagoon frequented by flamingos and other waders and shore birds. We also plan some free time in town giving you the opportunity to relax in a local beachside bar. 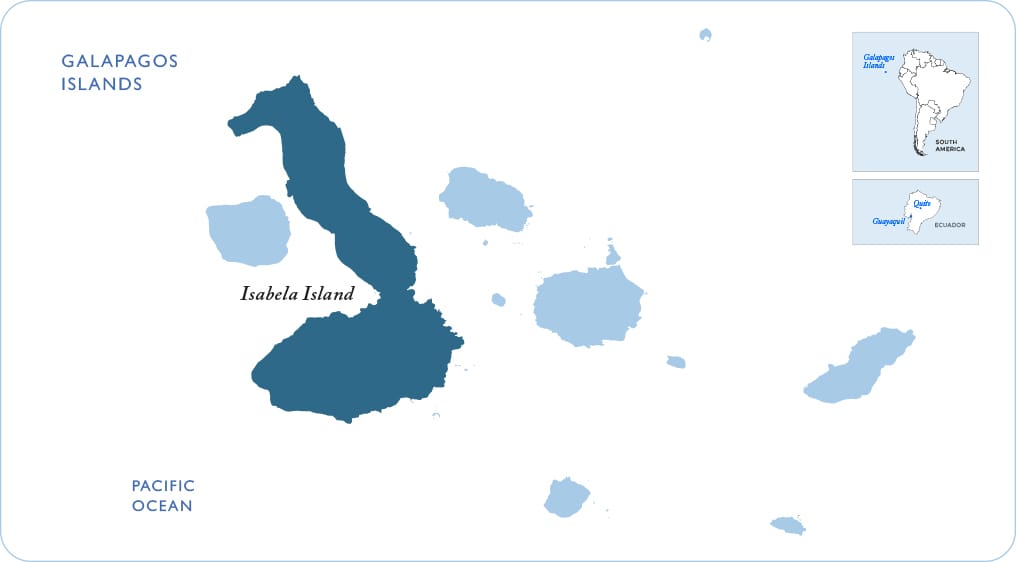