About San Cristobal Island in the Galapagos

Geology: San Cristobal Island is made up of two coalesced volcanoes. The southwestern half is a symmetric shield volcano made up of gently-dipping lavas and capped by a thick, deeply-weathered pyroclastic blanket and numerous satellite cinder cones. The southwestern shield became emergent around 2.4 million years ago; activity continued up to about 650,000 years ago. The northeastern half of the island is a more recently active volcano, dominated by eruptions from NE-trending fissures. The most recent flows are no more than a few centuries old.

San Cristobal Island is the only island with permanent fresh water, located near the highest part of the island (south) in a small lake called El Junco. The southern portion of the island is characterized by its rich vegetation, a result of the more humid climate.

Charles Darwin reported encountering a pair of giant tortoises feeding on cactus during his first landing on San Cristobal Island in 1835. Today the airport of this easternmost island in the chain is increasingly used as the arrival point for flights into and out of the Galapagos. The administrative capital for the province is Puerto Baquerizo Moreno on the southwestern shore, and in 1998 the Galapagos National Park Interpretation Centre opened for the benefit of islanders and travelers alike, presenting a comprehensive exhibit of the islands' natural history, human interaction, ecosystems, flora and fauna. It is also the place where cultural activities take place, including theatre, exhibitions and workshops. From the Interpretation Center, a 3 kilometer loop trail arrives at Frigate Bird Hill, where both magnificent-frigates” and great-frigates can be seen in the same colony—ideal for learning to distinguish the two bird species. A 45-minute bus ride from town takes you to “El Junco”, one of the few permanent fresh water lagoons in the islands. Its location in the highlands of San Cristóbal ( 2,300 feet or 700 meters ) ensures our passage through a variety of vegetation zones. The lagoon on San Cristobal Island offers a panoramic setting for exceptional bird watching including frigate birds that, in spite of being sea birds, go there to rinse the accumulated salt from their feathers.

Heading up the coast from Wreck Bay and Puerto Baquerizo, you will see Isla Lobos across a small channel off the coast of San Cristobal Island. This basalt island outcropping lives up to its name of “Sea Lion Island,” with its noisy population of frolicking and barking beasts. It is also a nesting place for blue-footed boobies and an excellent spot for snorkeling while on Galapagos cruises.

Playa Ochoa is located 6 miles from Puerto Baquerizo Moreno, the capital of San Cristobal Island and the Galapagos. The beach is small with easy access, Here you'll find the Chatham mockingbird and various species of Darwin finches. Toward the rear of the beach is a little hyper-saline pond where white cheek pintails can often be seen wading. The beach also provides a chance for some introductory snorkeling.

Leon Dormido , also know as Kicker Rock, is a spectacular formation that rises 152 meters ( 500 feet ) out of the Pacific 4 miles off the central western coast of San Cristóbal . It takes the form of a sleeping lion or the Sphinx if you look at the rock from the south, but from the north you can see that the rock is split, forming a colossal tablet and, piercing the sea, a great chisel ready for etching. Small vessels can navigate through the narrow channel between the two rocks that form Kicker Rock.

La Galapaguera is a tortoise reserve in semi-natural conditions. This beautiful facility was built by the Galapagos National Park Service to provide the chance for visitors to San Cristobal Island to take a look at another race of giant tortoise, the Saddle Back. To reach the reserve it's necessary to take a bus across the island from west to east. The ride takes 1 hour and the facility offers a dirt trail of easy access where 25 adult tortoises can be found in company with the very first babies to be born in captivity in this facility. 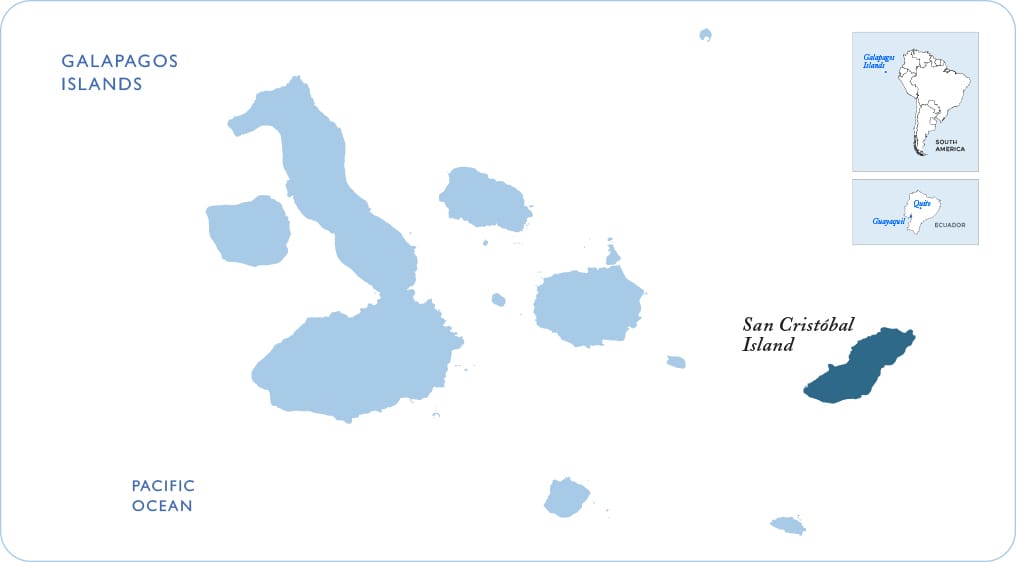