About Española Island in the Galapagos

Animals Regurlarly Seen: Endemic species of waved albatross, mockingbird, lava lizard, marine iguana and giant tortoises that have been repatriated as result of the breeding program carried out by the CDRS (Charles Darwin Research Station) and the GNP (Galapagos National Park)

One of the best dive sites in the world.

Geology: A relatively flat island, with some hills; considered as one of the islands whose lavas were extruded beneath the sea and later uplifted to form the island. A group of geologists found evidence (1980) of volcanic activity, which occurred after the uplift.

Hood Island, or Espanola Island, is the southernmost island of the archipelago, and is one of the most popular due to the breathtaking variation and sheer number of fauna that greet the visitors.

On the northeastern shore of Hood Island, Gardner Bay offers a magnificent long white sandy beach, where colonies of sea lions laze in the sun, sea turtles swim offshore, and inquisitive Hood mockingbirds boldly investigate new arrivals. Your Galapagos cruise yacht will be anchored just a few hundred feet away. You will be lured into the turquoise water for a swim, but just a little further off-shore, the snorkeling by Tortuga Rock and Gardner Island offers peak encounters with playful young sea lions and large schools of surprisingly big tropical fish, including yellow tailed surgeonfish, king angelfish and bump-head parrot fish. Sleepy white-tipped reef sharks can be seen napping on the bottom and sometimes Hammerhead sharks in a near by location.

The quantity and variety of wildlife at Punta Suarez, on Hood Island, is remarkable. Sea lions surf the waves beyond the breakwater landing, and tiny pups are known to greet your toes upon arrival. A few steps inland you will find the most peculiar population of marine iguanas in the Galapagos. They bear distinctive red markings, some with a flash of turquoise running down their spine and legs, and nap in communal piles. The trail then takes us beside the western edge of the island where Nazca boobies (formerly known as Masked boobies) nest along the cliff’s edge, and then descends to a rocky beach before rising to an open area and a large gathering of nesting blue-foot boobies. Galapagos doves, cactus finch and mocking birds forage nearby, unconcerned by human presence on all of Hood Island. The trail continues to the high cliff edge of the southern shore; below, a shelf of black lava reaches out into the surf where a blowhole shoots a geyser of ocean water into the air. Within this area, along the cliffs is the “Albatross Airport” where “Waved albatross” line up to launch their great winged bodies from the cliffs, soaring out over the dramatic shoreline of crashing waves and driven spray. In the trees set back from the cliff is one of only two places in the world where the Waved albatross nests. In fact, the 13,000 pairs that inhabit Hood Island constitute a total endemic population of this species of birds, with the exception of a very small population that occasionally nest elsewhere on the continental part of Ecuador. Lucky visitors can watch courtship ‘fencing’ done with great yellow beaks and necks among the large, fluffy, perfectly camouflaged chicks. Mating occurs year-round. 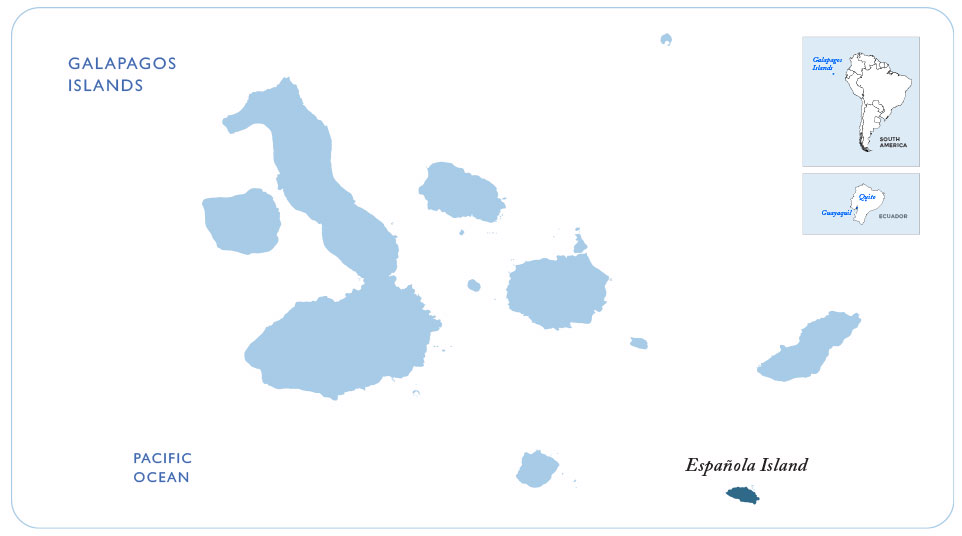