About Floreana Island in the Galapagos

Outstanding characteristics: Much of the vegetation is endemic to the visitor sites. There is coral reef on Devil's Crown. The most fascinating human history account in the Islands took place on Floreana Island.

Vegetation: Dense, most of it from the dry zone. In the highlands, where there is more humidity, most of the plants can be found.

Geology: Composed of a series of eroded volcanic hills, whose are and form make it virtually impossible to identify a central volcano. There are no signs of recent volcanic activity.

As reflected in its many names, Floreana Island has had a colorful history: Pirates, whalers, convicts, and a small band of somewhat peculiar colonists—a self proclaimed Baroness among them—who chose a Robinson Crusoe’s existence that ended in mystery and death. Today roughly a hundred Ecuadorians inhabit the island. In 1793 British whalers set up a barrel as Floreana Island's Post Office, to send letters home on passing ships. The tradition continues to this day, simply by dropping a post card into the barrel without a stamp. The catch is you must take a post card from the barrel and see that it gets to the right place. That is how the system began and continues to this day.

Punta Cormorant in Floreana Island offers two highly contrasting beaches; the strand where we land is composed of volcanic olivine crystals giving it a greenish tint that glitters in the sun. We descend here on our Galapagos cruises and a trail crosses the neck of an isthmus—that rises from behind a small cinder cone—to a beach of very fine white sand known as “Flour Beach”. Flour Beach was formed by the erosion of coral skeletons. Between the two beaches of Floreana Island is a hyper-saline lagoon frequented by flamingoes, pintails, stilts and other wading birds. Some 250 meters (700 ft) north from the point is an old submerged volcanic cone that has been worn down by waves; Devil's Crown is home to a myriad of marine species including several species of corals, sea urchins, and many other creatures including a great number of fish species, making this place one of the best snorkeling sites in the Galapagos. The eroded crater walls of Devil's Crown form a popular roosting site for sea birds including boobies and pelicans. 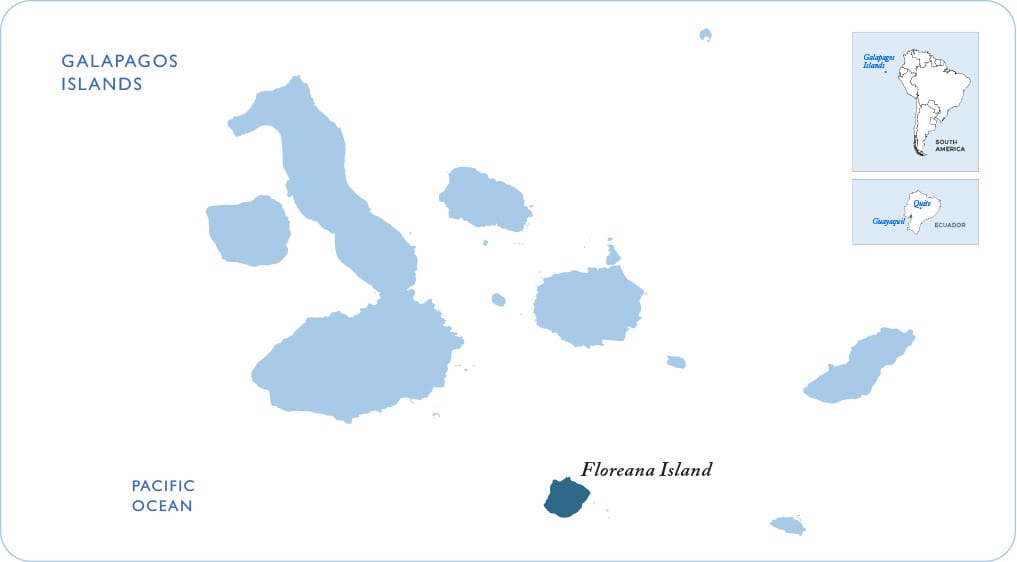