Scalloped Hammerhead Sharks are the most common species of hammerheads in costal regions, even appearing in shallow waters like estuaries and inlets.

They can be found in the water at the surface down to a depth of approximately 180 m (600ft). Young hammerheads, however, stay almost always in shallow waters along the shore to avoid being eaten by predators. In certain places like Wolf Island & Darwin Island in the Galapagos and Cocos Island in Costa Rica, and during specific times of the year in other areas, scalloped hammerheads form very large schools, sometimes with hundreds of individuals (mainly when Humboldt Current is strongest). However, they also swim the oceans alone in search for food and mates. Some hammerhead populations remain stationary, while others clearly wander, migrating in the direction of the poles in the summer. Sexually-related migrations have also been observed, e.g. hammerhead females undertake migrations during particular phases of their sexual development.

Description:
Like all members of the hammerhead family, the Scalloped Hammerhead has the typically formed "hammer" consisting of a central dent and an arched front edge. The eyes are found at the edges of the "hammer". Another typical characteristic is the free end tip of the second dorsal fin which almost reaches the tail fin. Hammerheads are silver-gray to gray-brown, fading to white on the underside. The underside tips of their pectoral fins are a dusky color. The rear edge of the ventral fin is straight. Hammerheads are known to have the largest brains of all the shark species.

Abundance & Distribution:
In Galapagos, Scalloped Hammerheads are abundant in Darwin Island and Wolf Island, with an occasional balance around the archipelago. They can be spotted at certain snorkeling sites during a Galapagos cruise. They live worldwide in tropical and semitropical waters.

Habitat & Behavior:
Hammerheads usually cruise over rocky reefs, boulder strewn slopes and along walls. They may be solitary or in small groups, occasionally seen in large schools and they feed primarily on fishes, including other sharks and rays.

Similar Species:
Smooth Hammerhead (S. zyganea), distinguished by a head with a smooth leading edge. This species is rarely observed in Galapagos. 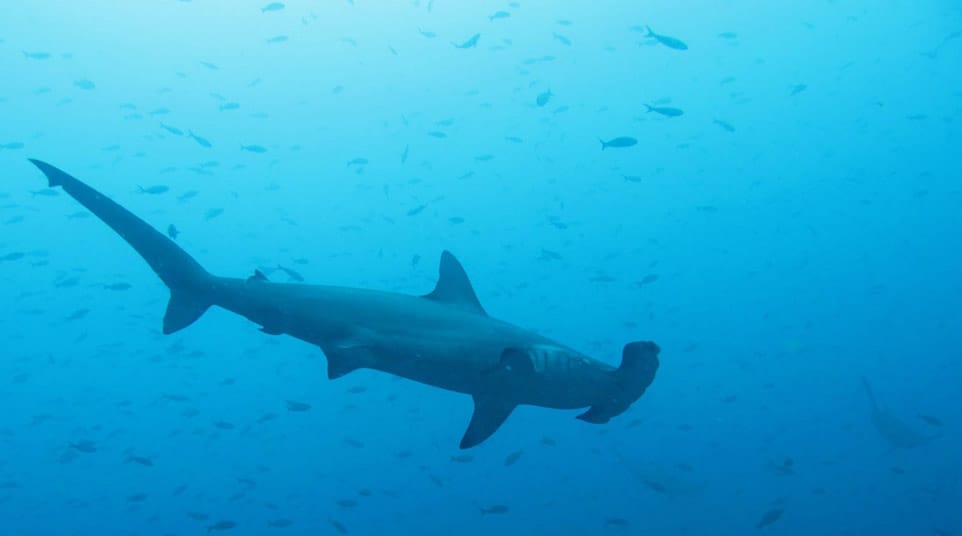