General Description:
Penguins are flightless, marine birds with thickset bodies; short, robust legs with webbed feet; and stout bills. The wings are compressed to form powerful, rigid flippers that are used for swimming underwater. When they are in the water, penguins can be difficult to see, as even when they are on the surface their bodies are held very low, often with only the head and neck visible. On land they appear rather clumsy, standing upright and walking with a waddling gait and occasional hops. The sexes are alike.

Specific Description:
Of the 17 species of penguins that live on the planet, the Galapagos penguin is the second smallest in the world and the only penguin to live north of the equator. It is fairly uncommon in Galapagos, but often seen on Galapagos cruise that visit Bartolome Island, the western side of Isabela Island and Fernandina Island. Population fluctuates between a few thousand and a few hundred birds, declining dramatically after El Niño years when there is little or no upwelling of the Humboldt Current. Galapagos penguins nest in loose colonies in burrows or crevices close to the shore, breeding throughout the year depending on food availability.

Identification:
Unmistakable; the only penguin in Galapagos. ADULT: Sexes alike, although males are slightly larger than females. Upper parts, flippers and face are black (brown when worn), with white line running through the eyes, down the cheeks and across the throat. Under parts are white with a black line across the breast and down the flanks. IMMATURE: Resembles adult but greyer and lacks the head and chest pattern.

Voice:
A braying sound reminiscent of a donkey. 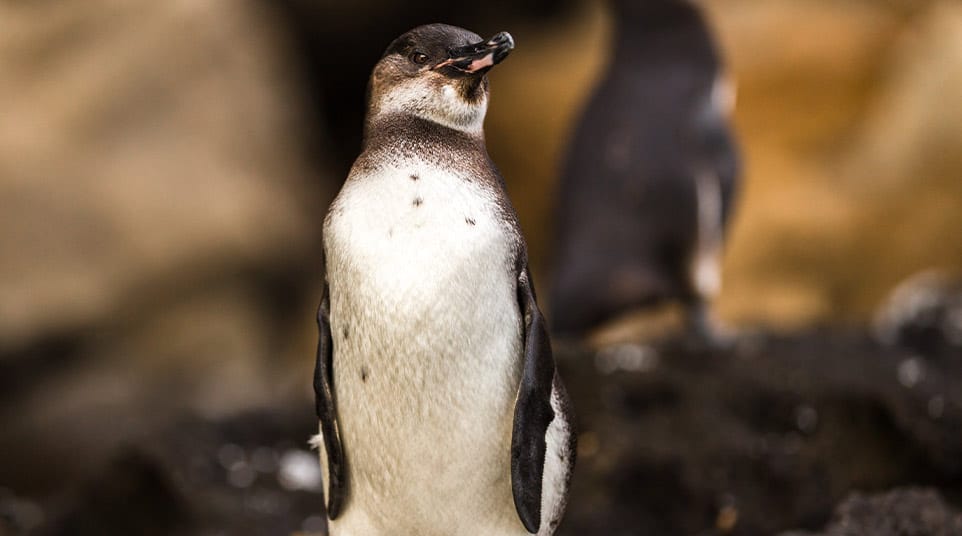 SNORKELING WITH PENGUINS IN THE GALAPAGOS
WATCH VIDEO