The Pacific Green Sea Turtle is listed as an endangered species by the IUCN and CITES and is protected from exploitation in most countries, including Ecuador. The Galapagos National Park closes certain beaches in the Islands when it is nesting season for Green Sea Turtles so tourists on a Galapagos cruise cannot descend on those beaches. However, these turtles are still in danger because of several human practices. Water pollution indirectly harms green sea turtles at both population and individual scales and many green sea turtles die caught in fishing nets.

Identification:
The carapace of green sea turtles is a blackish to olive-brown color and teardrop-shaped, tapering towards the rear, with a light keel. The vertebral scutes (central plates) are roughly equal in size and are hexagonal with straight edges; they are about the same size as coastals. The head is rounded and the beak is, at most, only slightly hooked. The sexes are alike, although female green sea turtles are distinctly larger than males, and males have a concave plastron.

Behavior:
The behavior of green sea turtles is almost entirely marine, coming ashore usually only to lay eggs. Egg-laying takes place from December to June, with a peak in activity during February. Green sea turtles usually lay their eggs at night. 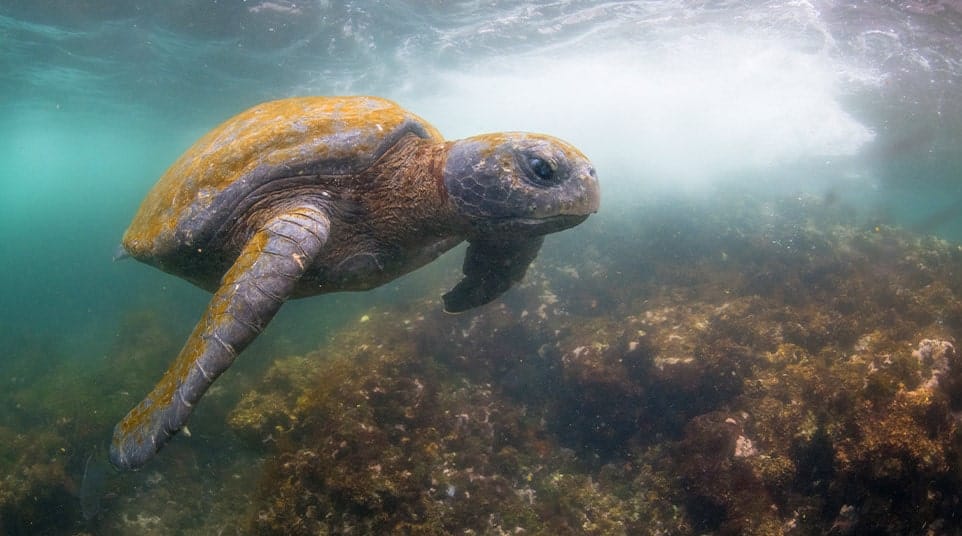