Identification:
Cormorants are largish water birds with elongated bodies, short set-back legs with large, webbed feet; long necks; and long, hooked bills which are used to catch fish underwater. Cormorants can be difficult to see when they are in the water as even when they are on the surface they hold their body low, sometimes with only the head and neck showing. On land, they are rather ungainly, walking slowly and methodically. After returning to land from a period of feeding at sea they habitually hold their wings out to dry. The Flightless (or Galapagos) Cormorant is the largest and only flightless cormorant in the world. The sexes are alike.

Specific Description:
The Flightless Cormorant is an uncommon, localized resident of Galapagos found on Fernandina Island and Isabela Island only. On our Galapagos cruises we always have the opportunity to view this bird. Population is estimated at 700 - 800 pairs in 100 small colonies, but declines dramatically after El Niño years. Nests on sheltered rocky shores, building bulky nests predominantly of seaweed just above the high-water mark. Breeds throughout the year, although most eggs are laid from March to September.

Identification:
Unmistakable; the only cormorants in Galapagos, with apparently functionless 'tatty' wings. ADULT: Sexes alike, although males are noticeably larger than females. Plumage is dark blackish-brown above and paler brown below. The eyes are turquoise. IMMATURE: Resembles adult but has glossy-black plumage and dull brown eyes.

Voice:
Adults give a low growl; young birds on the nest give a plaintive "wee-wee".

From the Blog:
• The Bird That Forgot How To Fly. 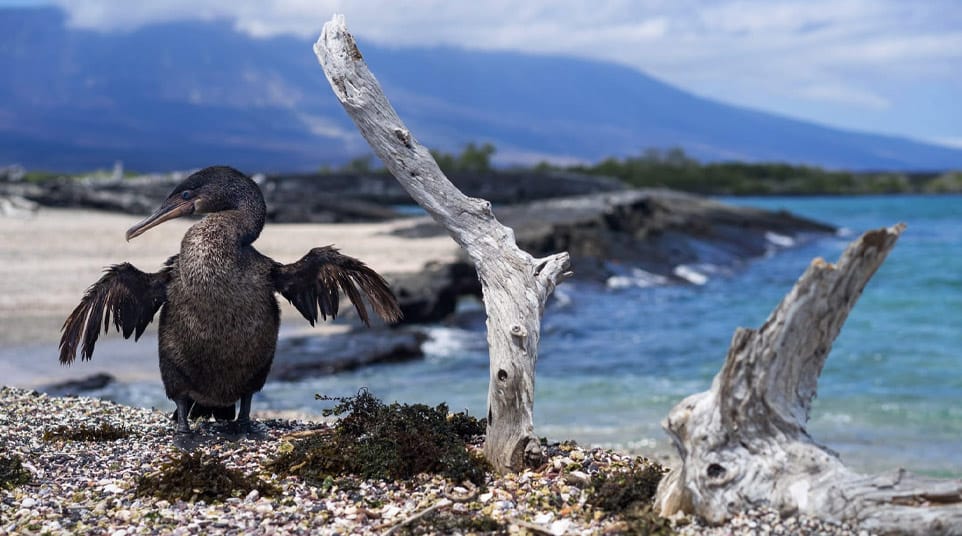