Twenty-eight species of reptiles have been recorded in Galapagos in recent times. Nineteen of these species are endemic to the archipelago, 11 of which are confined to single islands, and three species have been introduced.

Giant Tortoises, also know as Galapagos tortoises, are mainly found in the highlands of Islands like Santa Cruz, San Cristobal, Isabela and Española. However, giant tortoise are also often seen on lower elevations during the warm / wet season. Giant tortoises are endemic to Galapagos with 15 subspecies recorded around the archipelago. Their total population is estimated to a number of 15,000.

Identification:
Galapagos tortoises are unmistakable due to their large size and distinctive shape. The Galapagos tortoise exhibits two distinct carapace shapes: dome-shelled and saddle-backed, although intermediate forms do occur. In all subspecies the sexes are alike, although males are much larger than females, and have a concave plastron (ventral plate) and a noticeably longer and thicker tail.

Behavior:
Giant tortoises are usually only active from about 08:00 until 16:00. Mating may occur in almost any month of the year but reaches a peak during the warm / wet season, with eggs usually hatching between December and April. Sexual maturity of a Galapagos tortoise is attained at the age of about 20 - 25 years. During the breeding season male giant tortoises chase each other and posture by raising their heads as high as possible, the dominant individuals being those able to raise their heads the highest. 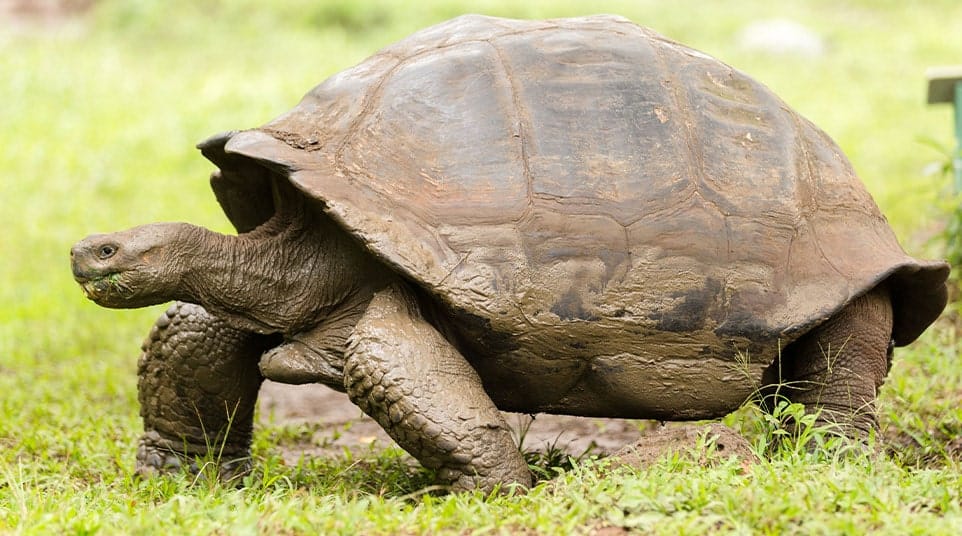 Life expectancy in the wild is thought to be over 100 years, making it one of the longest-lived species in the animal kingdom. Harriet, a female specimen kept in the Australia Zoo, was the oldest known Galápagos tortoise, having reached an estimated age of more than 170 years before her death in 2006. The Zoo claims that Harriet was probably 169 years old in 2004, although media outlets claimed the greater age of 175 at death based on a less reliable timeline.

WHERE DID THE GALAPAGOS TORTOISE COME FROM?

All subspecies of Galápagos tortoises evolved from common ancestors that arrived from mainland South America by overwater dispersal. Genetic studies have shown that the Chaco tortoise of Argentina and Paraguay is their closest living relative. The minimal founding population was a pregnant female or a breeding pair. Survival on the 1000-km oceanic journey is accounted for because the tortoises are buoyant and they can breathe by extending their necks above the water, and are able to survive months without food or fresh water. Because they are poor swimmers, the journey was probably a passive one facilitated by the Humboldt Current, which diverts westwards towards the Galápagos Islands from the mainland. The ancestors of the genus Chelonoidis are believed to have similarly dispersed from Africa to South America during the Oligocene.

The closest living relative of the Galápagos giant tortoise is the Argentine tortoise (Chelonoidis chilensis), a much smaller species from South America. The divergence between C. chilensis and C. nigra probably occurred 6–12 million years ago, an evolutionary event preceding the volcanic formation of the oldest modern Galápagos Islands 5 million years ago. Mitochondrial DNA analysis indicates that the oldest existing islands (Española and San Cristóbal) were colonized first, and that these populations seeded the younger islands via dispersal in a "stepping stone" fashion via local currents. Restricted gene flow between isolated islands then resulted in the independent evolution of the populations into the divergent forms observed in the modern subspecies. The evolutionary relationships between the subspecies thus echo the volcanic history of the islands.

WHAT IS THE LARGEST SPECIES OF TORTOISE?

The largest species of Tortoise is in fact the Galapagos Tortoise, often reaching enormous size—they can weigh as much as 300 kg (660 lbs) and can grow to be 1.3 m (4 ft) long. The biggest Galapagos tortoises on record reached 880 pounds and over 6 feet long. The species is native to the Galapagos islands, and subspecies are found on seven of the islands in the archipelago. Humans have caused species numbers to dive, due to hunting, habitat loss and introduction of non-native species. But recovery programs have helped to bring numbers back. Even so, the species is still listed as vulnerable to extinction.

HOW MUCH DOES A GIANT TORTOISE SHELL WEIGH?

Males can weigh more than 500 pounds (227 kilograms), and females average about 250 pounds (113 kilograms). They have thick, sturdy legs to hold up all that weight, but they still spend a lot of time lying down to conserve energy. Although they are massive animals, their shells are not solid. Instead, they are made up of honeycomb structures that enclose small air chambers. This makes it possible for the tortoise to carry the weight of the shell without much difficulty. The shell encompasses the animal’s ribs, so a tortoise cannot "walk out" of its shell, like you may see in cartoons. The lungs are located on the top of the tortoise’s body, under the top dome of the shell.

WHY DO GALAPAGOS TORTOISES HISS?

When threatened, the tortoise pulls itself into its shell with a hiss. The hissing sound is just the tortoise letting air out of its lungs. If a fight breaks out among males, the tortoises face each other with ferocious glares, open their mouth, and stretch their head as high as they can. Whoever reaches the highest wins, even if he is much smaller overall than the other male! The loser pulls his head in with a noisy hiss, and the battle is over. To us, this looks like they’re just putting on a show; but it’s a serious matter to the tortoises, especially in the wild, where fights occur over mates or a specific food item or clump of food. 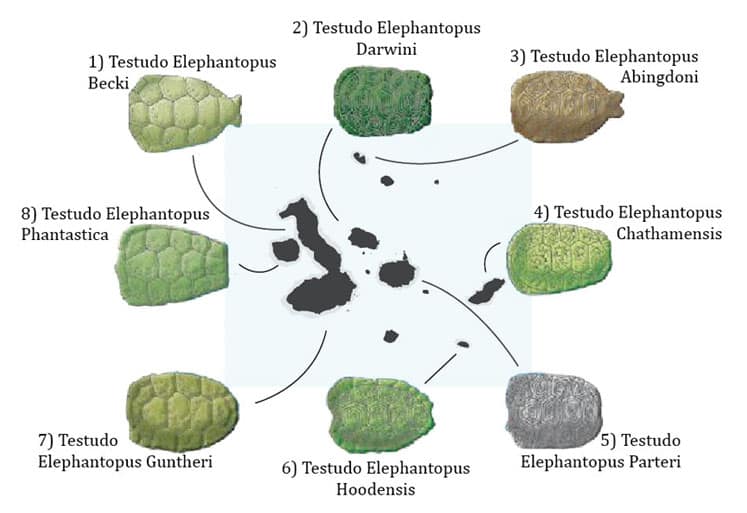