On our first day of our Galapagos cruise, we disembarked from the Evolution onto a small dock and onto Española (Hood) Island, so excited about seeing all the creatures we’d traveled so far to see. Even though we’d been told that the animals were very blasé about people, we still couldn’t believe our eyes. Within feet of the dock, a seal was spread across the path, snoozing in the sun. We tip-toed around so as not to awaken her. A few feet beyond, a boobie had built a nest in the middle of the path, and actively was pecking at any sandaled feet coming even remotely nearby. Sally Lightfoot crabs skittered sideways out of the way. Then, we were amazed when a Galapagos Hawk landed nearby on the top railing of a light house. “Hurry,” we all said. “Take a picture before he flies away!” We zoomed in on the native raptor and photographed our fill until our guide urged us onward.

Every few steps, we had to pause to take photos of sea lions nursing their young in the sun, of Marine Iguanas snorting salt sprays, and Galapagos Mockingbirds darting under the sparse bushes. Our guides had prepared us the previous night with a lecture about what we might see on this hike. They stressed that the only things that matter to the Galapagos natives are either prey or predators. Since we were neither, we were totally ignored. The natives went about their business as though we were invisible. 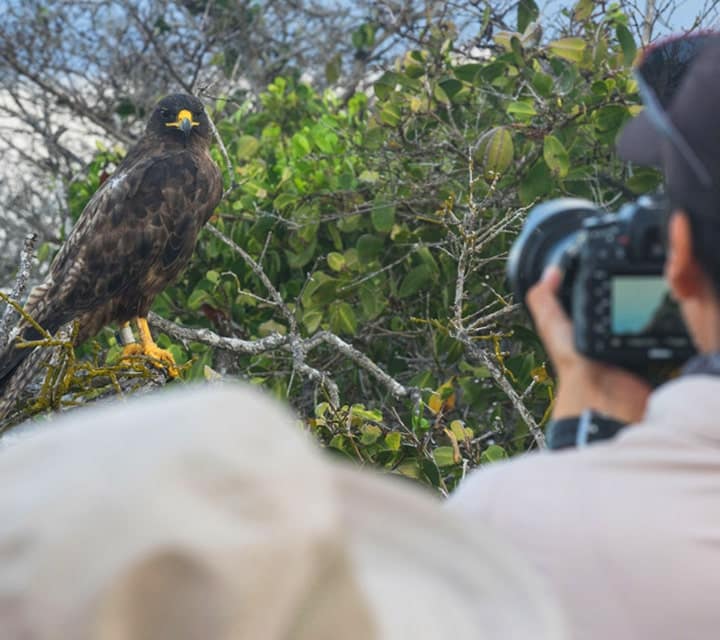 Just then someone gave a shout and we all whirled in time to see that the Galapagos Hawk had left the light house railing and had landed on the top of a bush just behind our group. He was so light that he perched on the tiniest of twigs without bending them. He sat only feet away from us totally exposed. Even as we snapped our pictures, the hawk took off again. But instead of climbing over our heads, or swerving around our group, he dove right though our group. Tourists and cameras went flying as we threw ourselves out of his way. One fellow actually was brushed by a wingtip. The hawk plunged through our group without even a look, as though we were truly invisible.

He landed about 6 yards away, again on the top of a bush. This time, it was readily apparent what had interested him. The Mockingbird poking around inside the bush would make a tasty morsel.

That hawk appeared now and then to frighten a Mockingbird inside a bush as we hiked the island. We were probably hiking through his hunting territory.

It was encounters like these that really set our trip through the Galapagos in my heart as a rare treasure.

END_OF_DOCUMENT_TOKEN_TO_BE_REPLACED

My Galapagos Cruise on Grace Yacht with Quasar Expeditions

END_OF_DOCUMENT_TOKEN_TO_BE_REPLACED

Fun in the Sand

Our Galapagos cruise truly was the ideal family vacation. We got to spend just the right amount of time with our kids and the great part was that on our voyage all the kids got along and made friendships. This was helped by our top notch Galapagos guides who also have kids. When we visited …