Book With Confidence, Explore With Peace of Mind – READ MORE
Sally Lightfoot Crabs in the Galapagos

Identification:
Sally Lightfoot Crabs have five pairs of legs; the front two bearing small, blocky, symmetrical chelae (chelae are also called pincers or claws). The other legs of the body of a Sally lightfoot crab are broad and flat, with only the tips touching the substrate. The carapace of sally crabs is just over 8 - 12 centimeters (3 - 5 inches) in length. They are rather flat and low to the ground and have been called 'spider-like' or quadratic in shape. Young Sally Lightfoot Crabs are black or dark brown in color and camouflage well on the black lava coasts of the Galapagos' volcanic islands. Adult sally crabs are quite variable in color. Some are reddish-brown, some mottled or spotted brown, pink or yellow.

Behavior:
Sally Lightfoot Crabs in the Galapagos Islands live amongst the rocks at the often turbulent, windy shore, just above the limit of the sea spray. It feeds on algae, like many other saltwater crabs, sometimes sampling plant matter and dead animals. It is one of the quicker moving and more agile saltwater crabs. 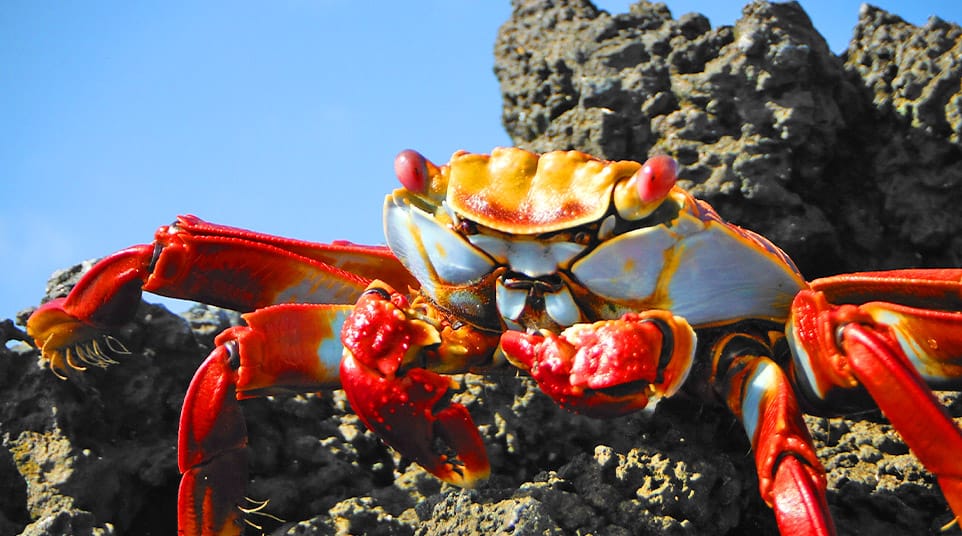