Name: Hawk - birds of prey
Family: Zalophus californianus
Scientific name: Buteo galapagoensis
Length: 55 cm (21.5 in) long and have a wingspan of 120 cm (47 in)
Weight: Males up to 1.86-3.5lbs depending on Island- Largest on Española Island

Just three species of diurnal (or day-flying) raptor birds have been recorded in Galapagos, one of which is an endemic resident. Each of the species represents a different group. The most commonly seen of these species in a Galapagos cruise is the Galapagos Hawk.

Hawks are large, broad-winged birds of prey with hooked bills, a fleshy cere (the area at the base of the upper mandible), powerful legs and feet, and sharp, curved talons. The Galapagos Hawk is the only species to occur in Galapagos and is readily identified by its dark plumage. The sexes are alike although females are larger than males.

The Galapagos Hawk is a resident of the Islands and it is a sedentary species. Found on most of the islands and occurring in all habitats from the coast to the highlands. It only breeds in drier areas in the lowlands, nesting throughout the year with a peak in activity in June and July. The Population of hawks is much reduced in recent years and now only about 130 breeding territories are known.

Voice:
Gives a range of calls, but typically a far-carrying "kee-kee-kee…".

Behavior:
Often seen soaring on updraughts and occasionally hovers. Feeds both by predation and scavenging. Females mate with more than one male, all birds helping to rear the young. Galapagos Hawks are commonly seen during a Galapagos cruise. 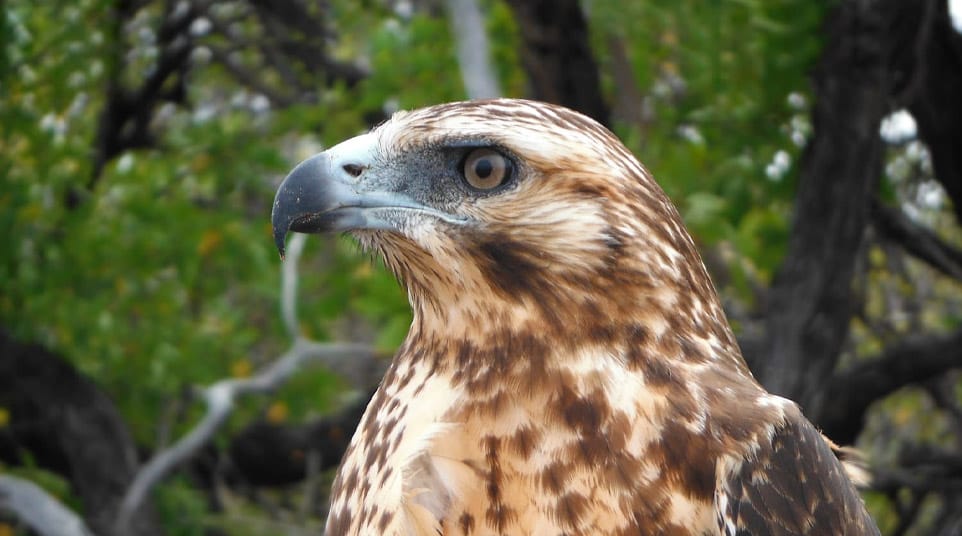