Waved Albatross – The Gliding Grace of the Galapagos

A massive, gliding spectacle awaits you from September to October on Española 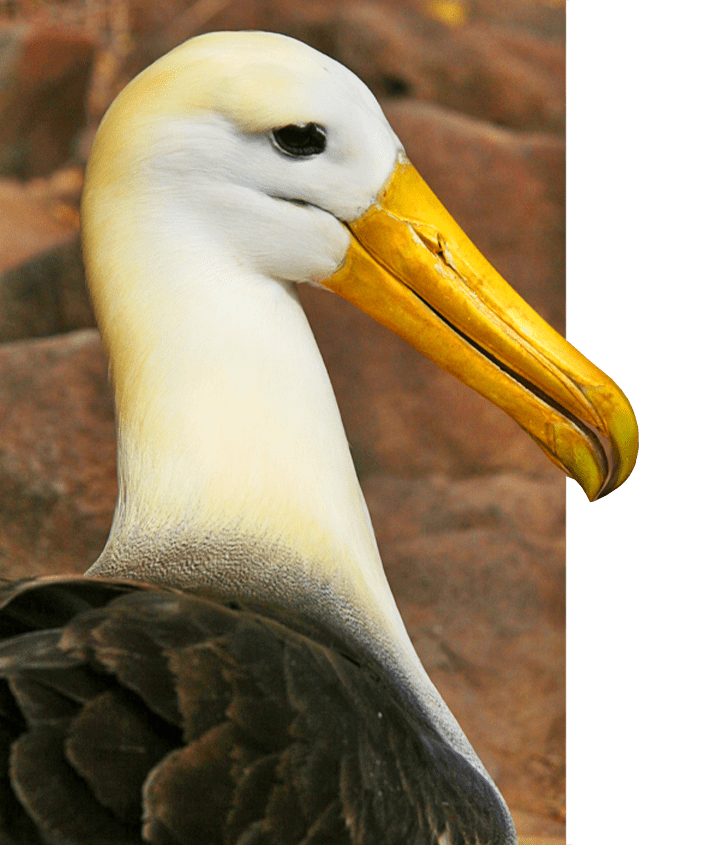 The Waved Albatross has a number of qualities that make it stand out from the Galapagos sea bird crowd: an exceptional wing span, beautifully animated features, heartwarming life-long courtships, 3 million lifetime frequent flier miles, and perhaps more grace than any bird on the planet.

Relying upon its exceptional gliding capabilities to carry it miles away from the Galapagos each year, it is also known as one of the few seabirds to migrate. As you plan your Galapagos cruise adventure, be sure to travel before the albatross migration – you won’t want to miss the chance to see this must-see bird in flight.

Travelers who want to see the waved albatross at its best must plan their visit between September and November in the Galapagos. During these months you are sure to see the albatrosses congregating in two main colonies on Española Island, practicing their courtship dances, caring for their chicks and soaring the friendly skies of the archipelago.

The Waved Albatross (Diomedea irrorata) appears to be a very present creature, both in the air and on land. They fly without efforting to flap their wings and waddle across land at an exceptionally slow pace, apparently paying no mind to the passing of time. But, there is one Waved Albatross characteristic that videos will never do these Sea Birds justice: their sheer size, which contradicts their elegance.

The first in-person glimpse of the Waved Albatross’ wingspan is astonishing, measuring 7-8 feet across (wider than Michael Jordan’s). During September and October, Quasar Expedition guests will see their trademark wave-like wings in full spread as they ride the sea breeze, seemingly on cruise control. 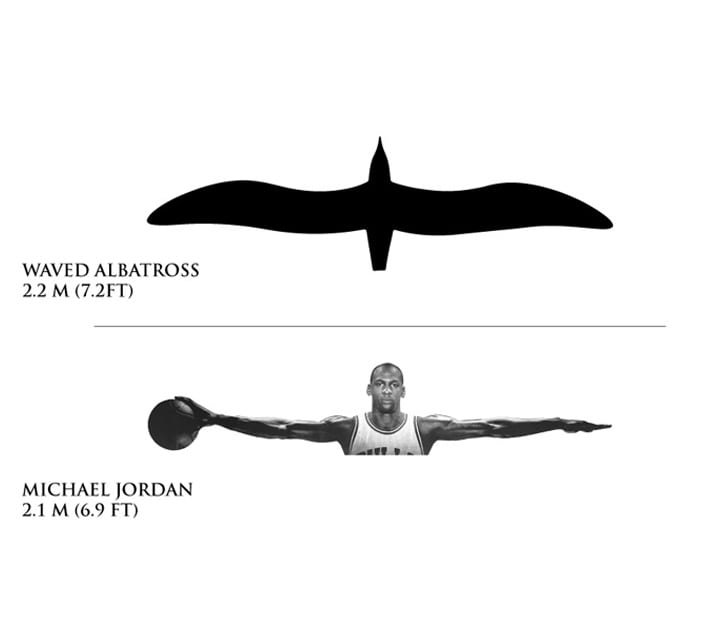 What some see as awkward, cartoon-like features, others see as strikingly beautiful, animated qualities. This species of albatross is known for its disproportionately long, hook-tipped bills, squatty legs, and large, webbed feet. Their dark, expressive eyes are particularly striking in contrast to their distinctive yellow-cream and white head feathers.

One of the most unique and notable characteristics of this amazing bird is their trademark glide. During September and October in the Galapagos, their eggs hatch after incubating for about 2 months. Parents are constantly going out to sea to find food for themselves and their chicks, which offers travelers great opportunities to witness the true spectacle of the albatross in flight. As noted by wildlife photographer Frans Lanting, “An albatross in flight spends barely more energy than an albatross on the ground doing nothing. Instead of expending energy, they tap the energy of the wind – in the air, they are a symphony.”

For another spectacle, simply observe the Waved Albatross in takeoff and landing. During takeoff, they look as though they should be wearing flight goggles, leaning into strong headwinds to leverage the force for liftoff. While they are expert at gaining altitude, these birds are prone to entertainingly awkward crash landings. It is common to see their runway mishaps when visiting them on Española Island. 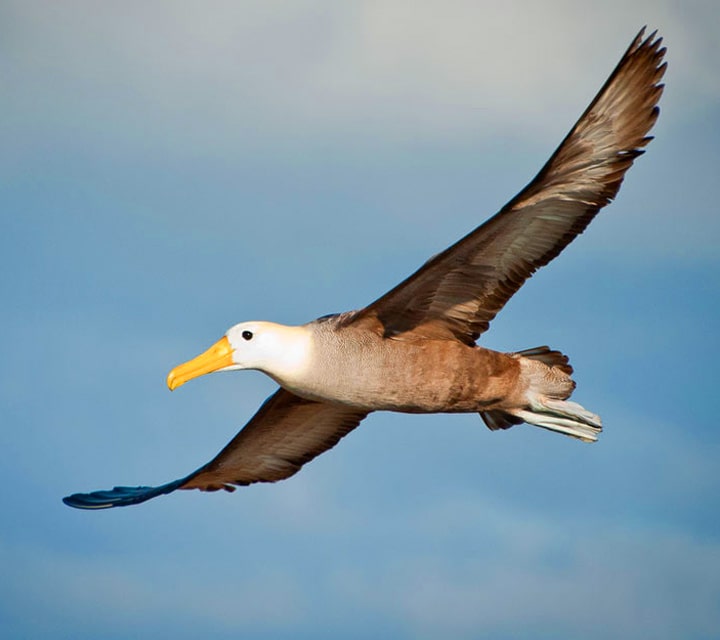 The Waved Albatross is one of the few birds that actually migrates and cannot be found year-round in the Galapagos. After their chick-rearing months, the whole population glides their way to the eastern waters off Galapagos and the coasts between Colombia and Peru. According to National Geographic’s Wings of the Albatross, an ordinary albatross may cover 3 million miles in their lifetime – a testament to the great migration they take and the lengthy periods they are away at sea. “When it comes to frequent flier miles, they must be in a class by themselves.”

To the human eye, they all look nearly identical, but this bird’s ability to navigate right back to their neighbors and loyal mates among a crowded sea of sea birds is bar-none. Upon return home from fishing expeditions and periods of migration, they find their way back to the same sea bird “precinct” and rejoin their mate. 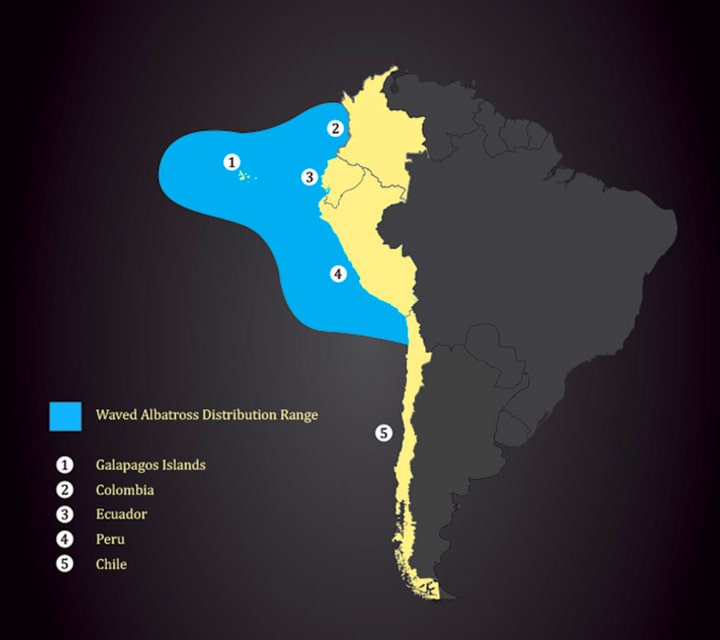 One of the Waved Albatross’ claims to fame is their now-viral courtship ritual that can often be witnessed between September in the Galapagos, and October. Heartwarmingly monogamous, they mate for life to raise their chicks and share the responsibility of incubating eggs.

Mates take their time getting to know each other, with courtship lasting two years in preparation for nearly three decades together. During this time, they choreograph their unique courtship dance, performed with elements of beautifully mirrored bobbing, rhythmic swaying, beak-slapping, expressing their giant wingspan and showing off their flexibility. While at rest, couples touch beaks in lieu of holding hands, seeming to cuddle while they take in the vibrant Galapagos sunsets.

The Waved Albatross is a localized resident of Galapagos, fishing and breeding only on Española Island. Currently, there are 50-70,000 individuals with 12,000 breeding pairs who work in tandem to fish, nest, and care for hatchlings.

The primary food sources are fish, squid, and crustaceans. They are known for being a resourceful bird, fishing day and night to capitalize on the passing of fish shoals and nibble on squid that rise to the ocean’s surface. While fishing at sea, the albatrosses congregate in raft-like formations to leverage power in numbers. Another resourceful tendency? Stealing fish from other seabird species. 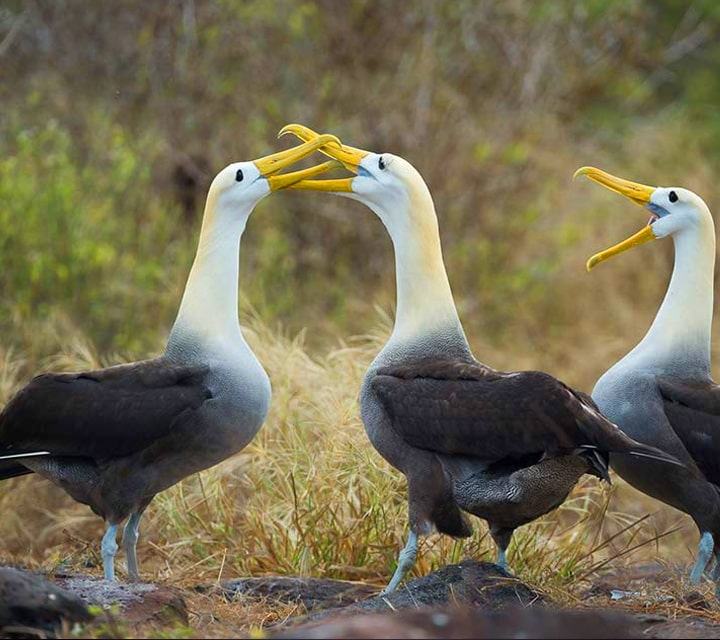 While the population appears to be booming by the sheer size of their colonies, there are multiple threats to these birds. Four more recent modern man-made threats are long line fishing, intentional harvesting, water pollution, and marine plastic pollution. The later has prompted a Galapagos Conservation Trust risk assessment as part of their Plastic Pollution Free Galapagos Programme.

Especially considering the modern threats to the Galapagos Waved Albatross population, it is a true privilege to witness and spread appreciation for the world’s most graceful seabird.