General Description:
Lava lizards are small reptiles with long, tapering tails, slim bodies and rather pointed heads. Their toes are long and pointed, quite different from those of the geckos which are the only like confusion species. The average size of the species varies between islands and the markings are extremely variable even within the same species. Unlike geckos, they are active during the day.

Identification:
Lava lizards are readily identified by their relatively small size and long, tapering tails, slim bodies and rather pointed heads, The toes are long and pointed and the skin is scaly, quite different from the geckos which are the only likely confusion species. Specific identification is impossible without first catching individuals. However, the fact that no more than one species occurs on any one island does facilitate identification. ADULT MALE: Very variable in coloration and the pattern of markings on the body. These markings are generally adapted to blend in with the substrate upon which they live. Most males are dark grey with black speckling, although some are reddish and others have pale stripes along their sides. When mature they have a black throat and develop a short crest of spiny scales which extends along the back and which can be raised during display, Males are 2-3 times heavier than females ADULT FEMALE: Similar to male in general structure but much smaller and lacking the spiny scales along the back. When mature they have a red or orange throat which in some species (e.g. Española Lava Lizard) extends to the whole head.

Behavior:
Active during the day. Highly territorial, both males and females defending territories against intruders of the same sex. Both sexes challenge intruders initially by performing 'push-ups' with their front legs, although this behavior is more vigorous in males. This behavior is commonly seen in our Galapagos Cruises. Breeding occurs from December, at the start of the warm/wet season. Males take up to three years to reach sexual maturity, whereas some females can breed when they are nine months old. 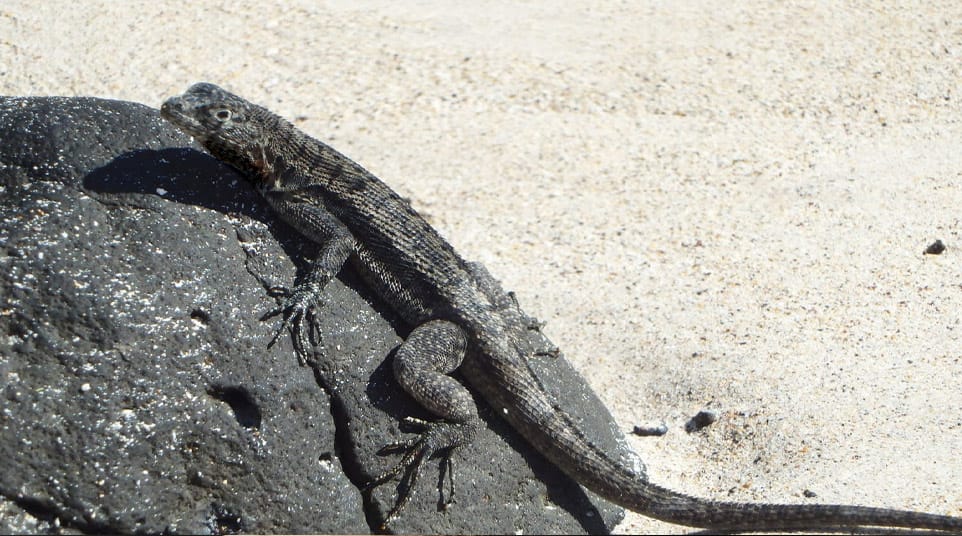