The land iguana is locally fairly common, inhabiting the arid zone of the islands. Hybrids with the Marine Iguana have been recorded on South Plaza but do not appear to be very long-lived. The Santa Fe Land Iguana is fairly common; confined to Santa Fe Island, inhabiting the arid zone. On Quasar Expeditions Galapagos Cruises you will have several opportunities to see these reptiles up-close.

In 1986, officers of the Directorate of the Galapagos National Park and the Charles Darwin Foundation carried out a field visit to Wolf Volcano on Isabela Island. During this visit, they observed five pink iguanas with black spots as they climbed to the summit of the Volcano.

Initially it was believed that these pink iguanas were individuals that had been stained by some external agent, but a later field visit to the volcano proved that they were in fact a different species. During this second field visit, four individuals were captured and blood samples were gathered to perform studies to determine whether this pink color was a result of an adaptation of the regular Galapagos land iguana (Conolophus subcristatus) due to an environmental factor or some particular type of food, or whether in fact it was a new species.

Finally, in 2003, in close collaboration with the Tor Vergata University of Rome, a research project was approved in which blood samples from 32 new individuals were added to the four previous samples gather, and sent to be analyzed. Extensive analysis proved that the pink iguanas found on Wolf volcano were in fact an entirely new species, never before recorded in the Galapagos Islands.

Identification:
Unmistakable. Galapagos pink land iguanas are large and have pale pink skin with black dots. They are easily distinguished from Galapagos land iguanas and from the Santa Fe Land Iguana due to the pink coloration of their skin. The row of spines along their body and along the back of their necks more closely resembles the Santa Fe Land Iguana. They are also easily identifiable from Galapagos Marine Iguanas by the rather pointed nose and their considerably larger size. Adult Male Identification: Not enough data recorded. Adult Female Identification: Not enough data recorded. No juveniles of this species have been found.

Behavior & Distribution:
Current data suggests that this new species lives exclusively around Wolf Volcano on Isabela Island. This volcano is the highest volcano of the archipelago and the iguanas have been found living from 800 meters above sea level, all the way up to the summit of the crater. Pink Iguanas are found forming small colonies in this area, but often also found singly.

Additional information on their distribution, population size, ecology, food and reproductive habits is still not known with complete certainty. No juveniles have been found yet, reason for which additional research is being carried out to determine whether a conservation program needs to be put in effect to ensure their survival. 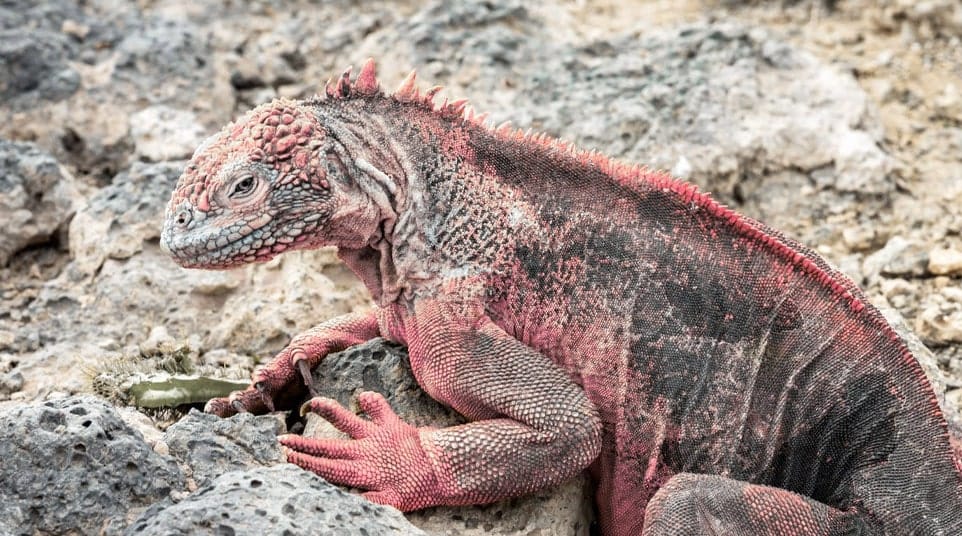