Located at the southern end of South America, Patagonia is a territory shared by the countries of Chile and Argentina. The region of Patagonia encompasses the southern section of the Andes mountain range to the southwest towards the Pacific ocean (Chilean side) and from the east of the Andes to the valleys it follows south through Rio Colorado towards the Atlantic Ocean (Argentinean side). It covers an area of around 300,000 sq. mi. (777,000 sq. km.), including some islands of the Argentinean Antartica and South Atlantic, as well as the popular territory of Tierra del Fuego, found on the southernmost tip of the continent. This region is very sparsely populated having approximately 1.5 people per sq. km.

The striking scenery of Patagonia is the result of major glaciological and geological transformations that took place in the region millions of years ago, creating mountains and countless valleys, glaciers, lakes and rivers. Patagonia is one of the most uninhabited areas of our planet and home to an incredible variety of wildlife and plant life, many of which is endemic to the region.

Patagonia is a distinct geographical region at the base of South America spanning the lower sections of Argentina and Chile. Patagonia is a sparsely populated region located at the southern end of South America, shared by Argentina and Chile. The region comprises the southern section of the Andes mountains as well as the deserts, steppes and grasslands east of this southern portion of the Andes. Patagonia has two coasts; a western one towards the Pacific Ocean and an eastern one towards the Atlantic Ocean. 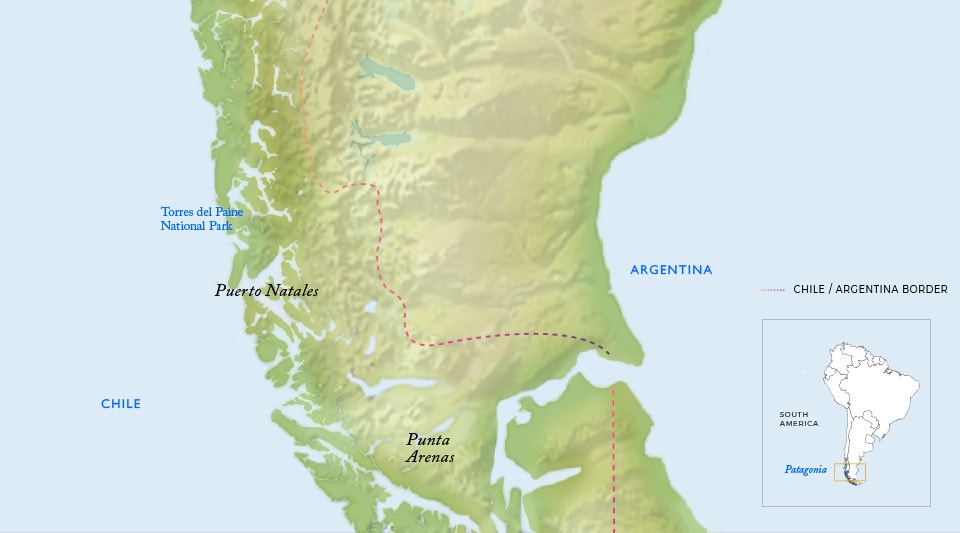 Both Chile and Argentina are democratic republics. At a state level, Patagonia lies inside two countries: Chile and Argentina. Both countries have organized their Patagonian territories into non-equivalent administrative subdivisions: Provinces and departments in Argentina; and regions, provinces and communes in Chile. Being a unitary state Chile's first level administrative divisions—the regions—enjoy far less autonomy than Argentine provinces. Argentine provinces have elected governors and parliaments, while Chilean regions have government-appointed intendants.

Chilean population is about 16 million people. People are generally friendly and hospitable. Most Chileans have a reserved nature, and tend to introversion, but at the same time, they have a sharp sense of humor. Their behavior tends to be more simple than most.

With a population of about 40 million, Argentinians are cultured and sophisticated people. They have an important influence from Europeans, especially Italians, which has given them a unique flavor among Latin American nations. Argentinians tend to be passionate, say things with almost no hesitation, and have a strong national pride.

The whole Patagonia has a population of about 2 million people. Southern Patagonia is southernmost part of the American Continent. Patagonians use to say they live at the end of the world. The result of this isolation has mixed European and indigenous people gradually.

Time zone in Patagonia
Argentina is three hours behind GMT. Chile is four hours behind GMT. From October to March both countries observe daylight savings, putting their clocks forward by one hour. Basically this means that most of the time Patagonia is within one or two hours of USA Eastern Standard time.

Language of Patagonia
The official language of Patagonia is Spanish but there are small pockets of indigenous communities within Patagonia who speak Mapuche. In larger cities, you're likely to meet locals who know some English, but in rural areas this is rare, so knowing basic Spanish travel phrases (or travelling with a guide from Quasar that knows the language) is very helpful.

Patagonia Climate
The summer season in Patagonia runs from December to March. The highest rainfall is during the Patagonian winter (June to September) but days are changeable and can be hot and sunny one day, to wet and windy the next year round. The summer season is some of the best times to travel to this part of the world, as winter months can sometimes be harsh and inhospitable. See more on climate here: Patagonia Weather.

Patagonia Vaccinations
You should have hepatitis A and tetanus vaccinations as well as chicken pox and measles if you've never caught them before. However, no vaccination certificate is required to enter either Chile or Argentina. Rabies and malaria medication is not considered necessary in the areas that we travel, but may be required if you are doing further independent travel. See more here: Patagonia vaccinations / immunizations

Electric voltage in Patagonia
In Patagonia, most electric voltage is 220 volts, 50 cycles (220v 50Hz). Most travel appliances, such as laptop computers & cell phone chargers, have an auto volt transformer (it will say '110v-240v' for example), but appliances or electric devices designed for 110 volts only will need a transformer and not just a plug adaptor.