General Description:
Albatrosses are the largest of the sea birds, with extremely long, narrow wings which are held stiffly in flight. They have long, stout, hook-tipped bills with raised tubular nostrils, and shortish legs with large, webbed feet. Albatrosses are exceptional gliders, rarely flapping their wings other than in calm conditions. During such conditions they often sit on the sea for long periods. Albatrosses only come to land to breed and when they do they are somewhat ungainly, walking with a slow, rather waddling gait. The sexes are alike.

Specific Description:
The Waved Albatross is a localized resident of Galapagos, breeding only on Española Island and seen on all our Galapagos cruise. Total population is estimated at c. 50,000 - 70,000 birds, including 12,000 breeding pairs. Waved Albatross breed from March to January, nesting on the ground.

Identification:
Unmistakable; due to its large size and very long wings. It is the largest breeding bird in Galapagos. ADULT: Sexes alike, although males are generally slightly larger than females. Plumage is mainly gray-brown with a pale head and neck, and the back of the neck is tinged yellow. Under wings are white with dark trailing-edge. The bill is large and yellow. IMMATURE: Resembles adult but head whiter and bill dull.

Voice:
Silent at sea, but gives a long, loud "whoo-oo" during display.

Behavior:
Pelagic. Very accomplished fliers, gliding for prolonged periods without flapping, particularly in windy conditions. Feeds from the surface, usually far out to sea. Performs bill-snapping and bill-rattling courtship display at breeding colony (see video above), mainly towards the end of the breeding season.

From the Blog:
• Waved Albatross - The Gliding Grace of the Galapagos 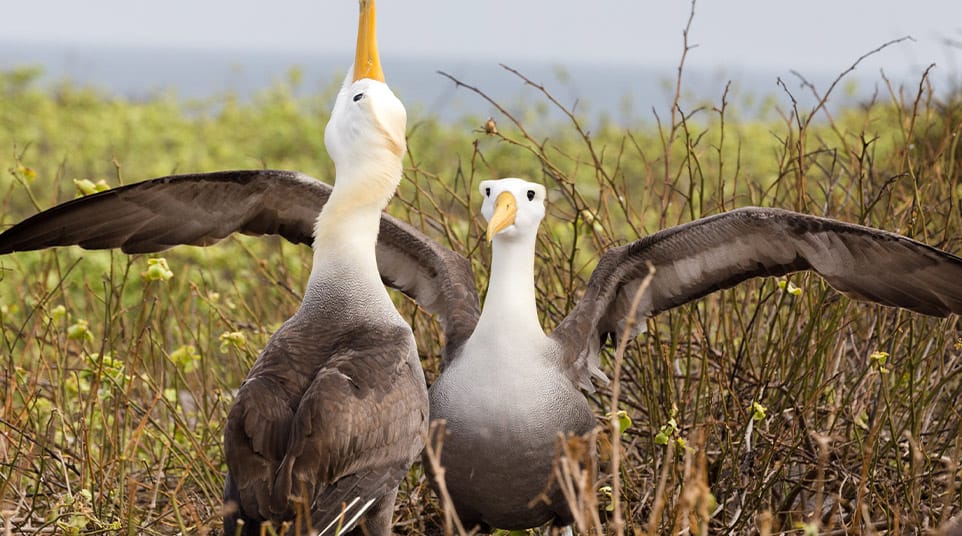