The Galapagos fur seal is common around the archipelago and we will have a chance to see it in Santiago Island while on a Galapagos cruise. It is found in the shore zone, mainly along rocky shores. It is rarely seen at sea as it feeds nocturnally. Population is estimated to number about 40,000 individuals in the archipelago.

It is rarely seen at sea as it feeds nocturnally. Population is estimated to number about 40,000 individuals in the archipelago.

Identification:
Similar to Galapagos Sea Lion. Distinguished by its considerably smaller size, much thicker fur, proportionally shorter and broader head, more pointed nose, large and slightly bulging eyes with a glazed expression, prominent ears which tend to stick out from the head, and proportionally larger flippers. ADULT MALE: Considerably larger than female, with a thicker neck. Fur blackish to dark brown. ADULT FEMALE: Much smaller than adult male. Fur is brown, sometimes with a slightly paler area on the nose and around the eyes.

Voice:
Less vocal than the Galapagos Sea Lion, but the voice, although similar, is rather more guttural.

Behavior:
Forms small colonies on rocky shores, often lying in shady crevices during the heat of the day. Males are highly territorial, particularly during the mating season which runs from August to November, vigorously defending their territories against intruders. Males take five or six years to become fully mature; females are fully sexually mature at three years old. Most pups are born in October. Usually much shyer than the Galapagos Sea Lion. It feeds at night. 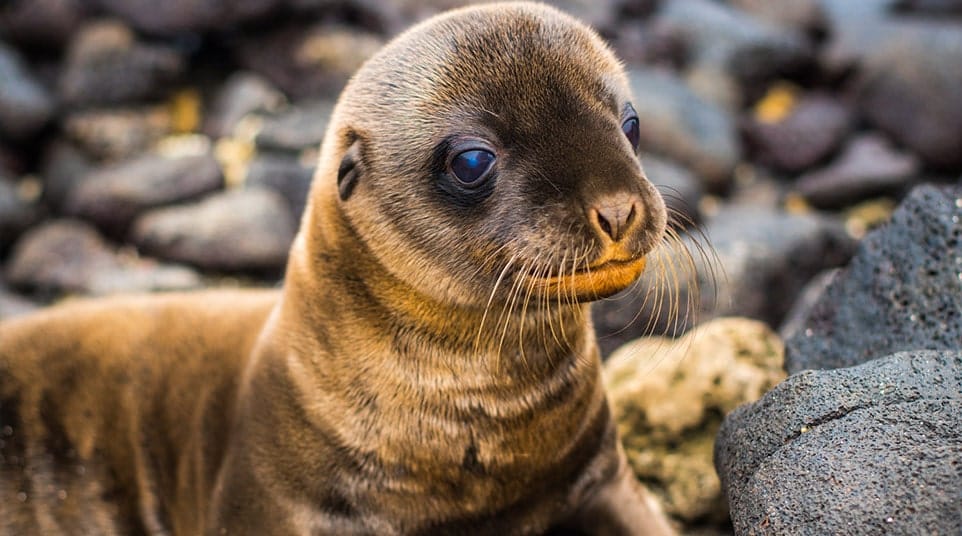