General Description:
Herons, egrets and night-herons are medium- to large-sized waterbirds with long necks and legs, unwebbed feet and long, straight, dagger-shaped bills. The smaller, white herons are usually referred to as egrets. The sexes are alike in all species.

Specific Description:
The Great Blue Heron is a resident of Galapagos and commonly seen on a Galapagos cruise; endemic subspecies cognata. It is found in small numbers in coastal areas, particularly near lagoons on San Cristobal Island, Santiago Island and Santa Cruz Island. This heron breeds throughout the year, nesting singly close to the shore, usually in mangroves.

Identification:
Unmistakable; a very large, long-necked, grey heron. ADULT: Upperparts pale grey; sides of neck violaceous-grey. The head is white with a broad black line along the side of the crown extending to the long crest. The underparts are mostly white with black spots on the breast. The legs and bill are yellow, becoming pinkish during the breeding season. IMMATURE: Grey-brown with dark bill.

Voice:
Gives a harsh "kraak" in flight and a soft "frawnk" if disturbed near nest. 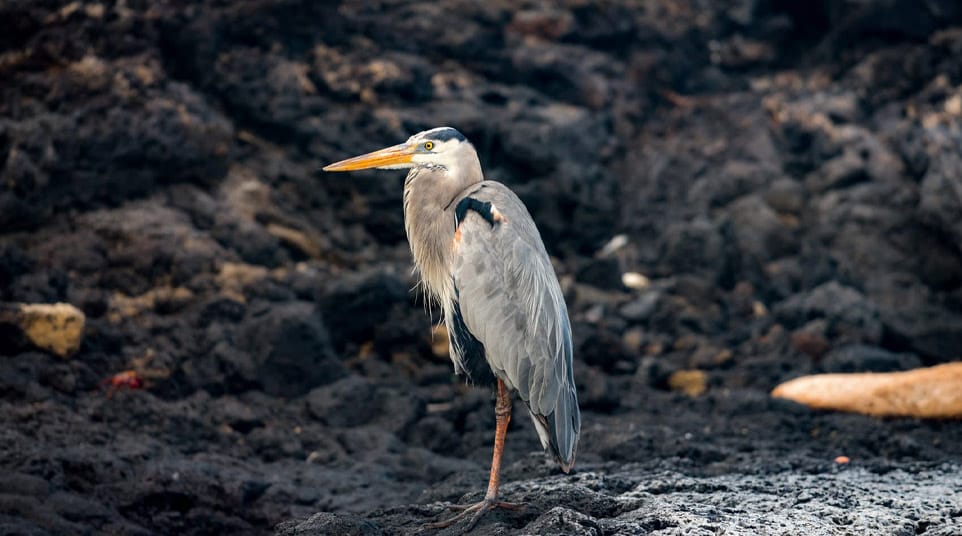