The Galapagos shark is quite similar to the Grey Reef Shark but has a rounder head and a thicker body towards the tail section. It can often be difficult to identify when spotted next to other shark species. Galapagos sharks are normally found in very isolated spots in the world, primarily concentrated in the Galapagos Islands. They can grow to be nearly 12 feet in length.

Galapagos sharks pups can be approximately 22 to 32 inches long and a litter can be anywhere from 6 to 16 pups. The young pups stay in shallow waters to avoid being eaten by other sharks, including adult Galapagos sharks, as well as a series of other larger predators.

Description:
The Galapagos Shark is one of the larger species in its genus. These sharks have a slender, streamlined body, typical of the requiem sharks. They have a wide and rounded snout with indistinct anterior nasal flaps. The eyes are round and of a medium size for a shark of that size and the mouth usually contains 14 tooth rows on either side of both jaws, plus one tooth at the symphysis (where the jaw halves meet). The upper teeth are stout and triangular, while the lower teeth are narrower; both upper and lower teeth have serrated edges.

Galapagos sharks primarily inhabit clear waters, coral reefs and rocky bottoms, and often swim a few meters above the substrate. The Galapagos Shark is a common but habitat-limited species, and is normally found at depths of 2 m but ranges to the open ocean adjacent to islands, from the surface to at least 80 m. Juveniles seem to be restricted to shallower waters, with a depth of 25 m or less, which they apparently use as nursery grounds to avoid being eaten by other sharks, while the adults range offshore.

Abundance & Distribution:
In Galapagos, Galapagos Sharks are abundant, primarily on Darwin Island and Wolf Island, with an occasional balance around the archipelago. They can be spotted at certain snorkeling sites during a Galapagos cruise. They live worldwide in tropical and semitropical waters.

Habitat & Behavior:
Galapagos sharks usually cruise over rocky reefs, boulder strewn slopes and along walls. Galapagos sharks are found in aggregations but apparently do not form coordinated schools like hammerhead sharks do in Galapagos. They feed primarily on bottom living fishes (eel, flatfish, triggerfish), but also feed on flying fish, squid and octopus. 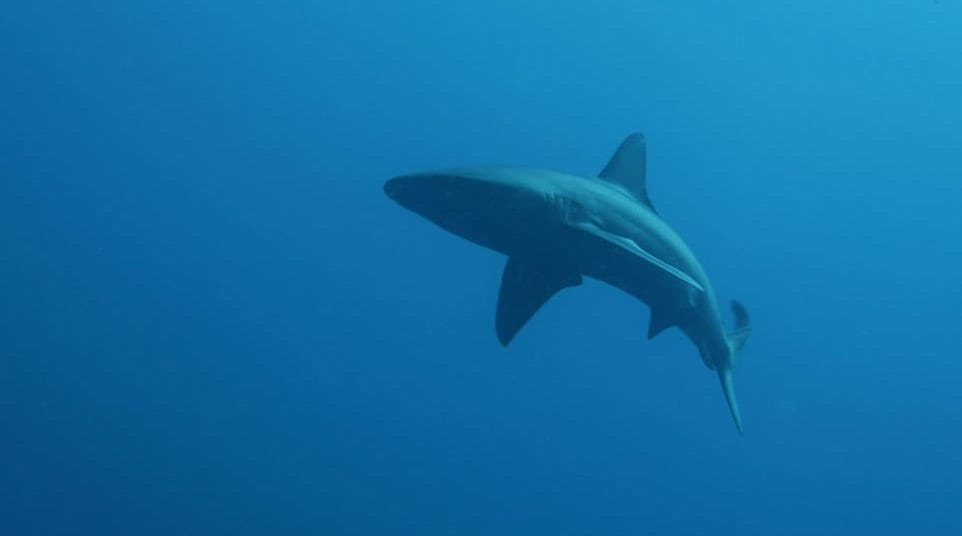