Red-necked Phalaropes are common migrants of Galapagos, particularly between August and April with large flocks often occurring between the southern and central islands from December to January. Found at sea or on saltwater lagoons.

Identification:
The smallest and daintiest phalarope; Red-necked Phalaropes are thin-necked and very thin-billed. As with all phalaropes, the male is less brightly colored than the female in breeding plumage, reflecting their reversed roles in incubation and rearing young. ADULT FEMALE BREEDlNG: Bright chestnut-red sides to neck; slate-grey crown, face, sides of neck and breast; white throat and eye-spot; dark mantle, with bright buff lateral stripes. ADULT MALE BREEDlNG: Similar to breeding female but duller. ADULT NON-BREEDlNG / FIRST-WINTER: Predominantly grey above and white below, with black crown and eye-patch (usually slightly wider than in Red Phalarope, which is very similar in this plumage). Upperparts more contrasting than in Red Phalarope, with whitish fringes forming stripes along edge of mantle and scapulars. In flight shows darker central upper tail-coverts than Red. JUVENILE: Resembles non-breeding adult, but dark brown above and buffy-pink below.

Voice:
Call is a shrill "kip", reminiscent of Sanderling.

Behavior:
Unlike other waders, phalaropes are normally seen swimming rather than on land. Food is picked from the water surface, disturbed by the bird's rapid spinning motion. Highly gregarious and often extremely tame. 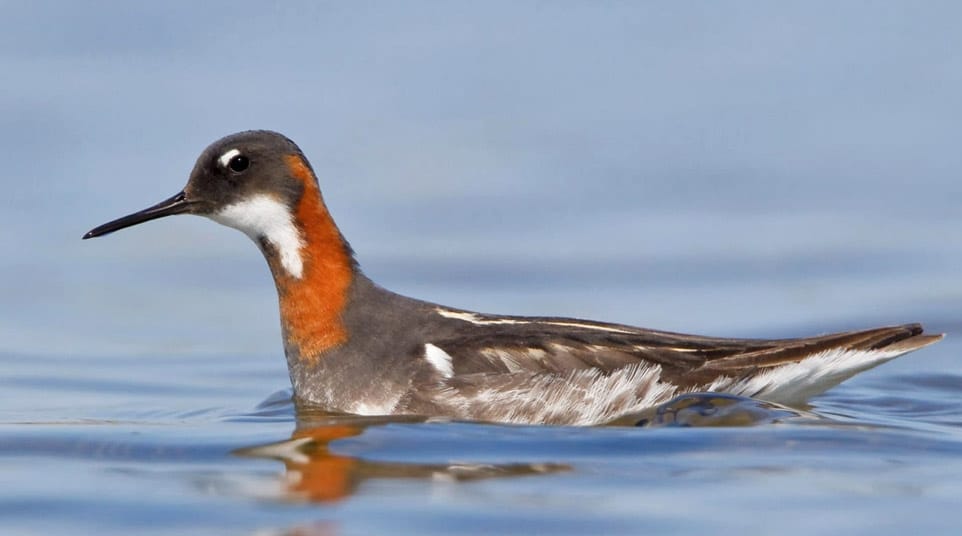