General Description:
Pelicans are large, heavy water birds with short legs, webbed feet and exceptionally long bills. The bill has a large, distensible pouch which is used as a scoop-net to catch fish. In flight, pelicans hold their head and neck drawn back and have slow, rather ponderous wing beats; they are, however, accomplished gliders. Pelicans are very ungainly on land, rarely walking far. The sexes are alike.

The Brown Pelican is a common resident of Galapagos; endemic subspecies urinator. Population estimated at a few thousand pairs and it breeds throughout the year, nesting in small colonies in low bushes and mangroves, occasionally on the ground.

Identification:
Unmistakable, due to its very large size and long, characteristic bill. ADULT: Sexes are alike, although females are generally slightly smaller than males. Plumage mainly gray-brown, with chestnut and white markings on head and neck. IMMATURE: Resembles adult but lacks head and neck markings and has pale under parts.

Behavior:
Often feeds by plunge-diving from the air, usually close inshore. They are accomplished fliers, regularly seen soaring on thermals. Often fly to or from feeding grounds in orderly rows, with birds flapping and gliding almost in unison. 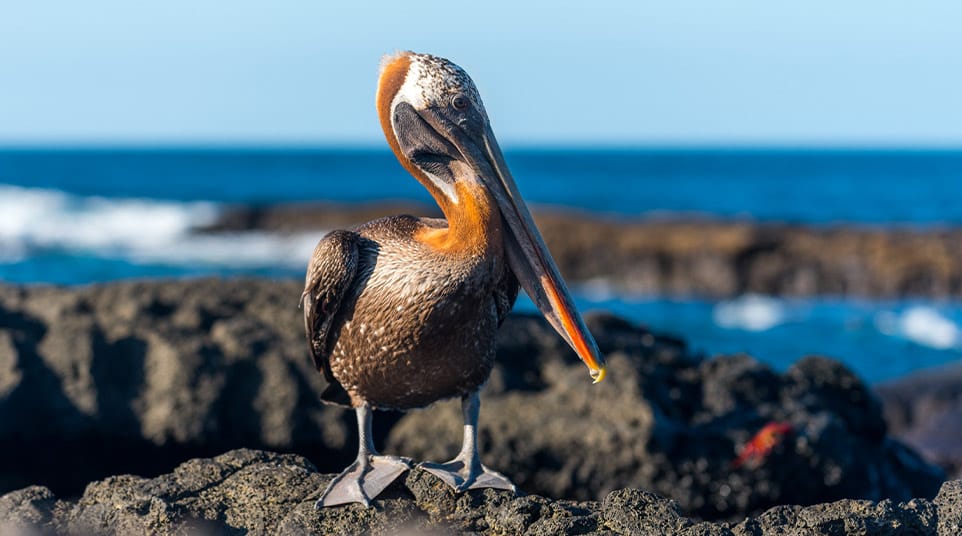