A total of 12 species of shearwaters and petrels have been recorded in Galapagos, but only 2 are residents. Although the species in the family Procellariidae range from the large giant petrels to the diminutive prions (which have both been recorded as vagrants to Galapagos), the species which are recorded regularly can be divided into two groups: shearwaters and petrels. All species in the family are long-winged, have short legs and webbed feet, and raised nostril tubes at the base of the bill. Shearwaters are medium-sized, rather compact seabirds with long, slender bills and straight, stiffly-held wings in flight. Petrels are similar in size and shape to shearwaters but, in comparison, have short, deep bills and in flight tend to hold their wings slightly forward from the shoulder and sharply angled at the wrist or carpal joint. In all species recorded in Galapagos the sexes are alike and immature plumages resemble adult plumage.

Common resident; endemic subspecies subalaris. Population estimated at c. 10,000 pairs in about c. 30 colonies; breeds throughout the year, nesting in crevices or burrows which are visited during the day. It is often seen during a Galapagos cruise.

Identification:
A small shearwater; the only species breeding in Galapagos. Blackish upper parts and crown, white under parts and throat. Under wings white with dark trailing-edge and wing-rip.

Voice:
Usually silent at sea, but a loud "kee-kaa-cooo" is given near the breeding colony.

Behavior:
Pelagic. Flight is direct, often just skimming the surface of the sea, with stiff wings and rapid wing beats interspersed with short glides. Often forms large feeding flocks, some times close inshore. Feeds by plunge-diving from or close to the surface. 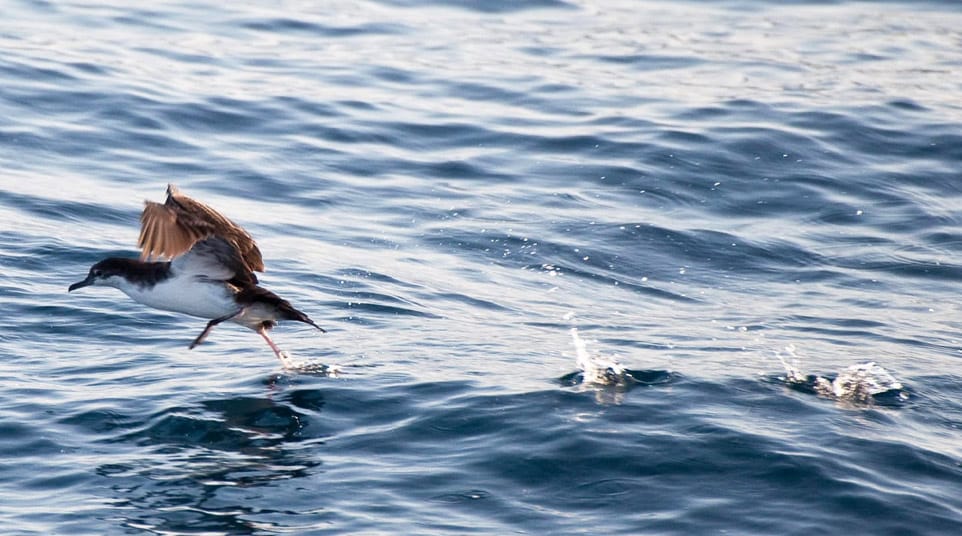