A total of 12 species of shearwaters and petrels have been recorded in Galapagos, but only 2 are residents. Although the species in the family Procellariidae range from the large giant petrels to the diminutive prions (which have both been recorded as vagrants to Galapagos), the species which are recorded regularly can be divided into two groups: shearwaters and petrels. All species in the family are long-winged, have short legs and webbed feet, and raised nostril tubes at the base of the bill. Shearwaters are medium-sized, rather compact seabirds with long, slender bills and straight, stiffly-held wings in flight. Petrels are similar in size and shape to shearwaters but, in comparison, have short, deep bills and in flight tend to hold their wings slightly forward from the shoulder and sharply angled at the wrist or carpal joint. In all species recorded in Galapagos the sexes are alike and immature plumages resemble adult plumage.

Uncommon resident; endemic subspecies phaeopygia often treated as a separate species: 'Galapagos Petrel'. Population estimated at 10,000 - 50,000 pairs in four colonies located in the highlands; breeds throughout the year, with different colonies nesting at different times; nests in burrows which are visited only at night. Not often seen during a Galapagos cruise.

Identification:
A large, long-winged petrel. Upper parts, crown and side of neck and breast uniform brownish-black; under parts and sides of rump white; conspicuous white forehead; under wing white with black line running along forewing and across center of wing towards body. Small black mark in 'armpits' is diagnostic

Behavior:
Pelagic. Flight action characteristic: in calm weather involving a series of 3 or 4 flaps followed by a long glide on bowed and angled wings; in windy conditions glides in spectacular long arcs, high above the water, with wings bowed. Usually found well away from land during the day. Feeds from the surface whilst resting on the sea or by dipping in flight. 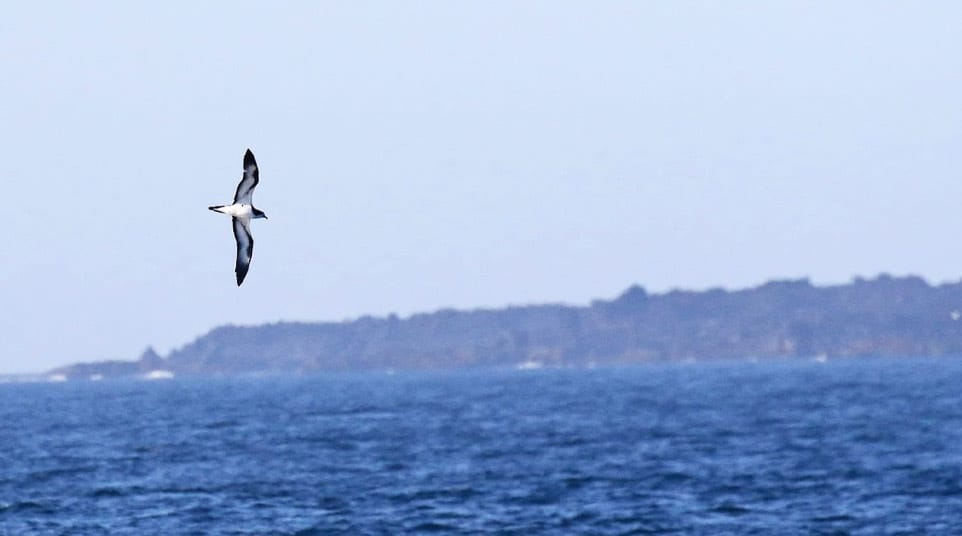