The islands that are visited on Galapagos cruises are the peaks of immense Galapagos Islands volcanoes submerged beneath the sea. While we are not likely to see an actual eruption (last eruption was on May 2008 in Isabela Island), we will see the results of past volcanic activity everywhere on the islands. The lava flows and ashbeds, the craters and volcanic necks, even the black sand beaches are all signs of the volcanic activity that continues even today on the western islands.

The volcanic islands of the oceans are a very different landscape from what we see in the crumpled and folded mountains of the continents. The Galapagos Islands are a long chain of isolated volcanoes set on a flat sea floor.

The western end of this chain has the tallest and youngest volcanoes while the progressively smaller and older volcanoes extend to the northeast towards South America. The Galapagos volcanoes are also composed of basalts and basaltic "tuffs" rather than the many different kinds of rocks found on the continents.

The Galapagos Islands, like the Hawaiian islands, lie over a hot spot, a place where a plume or column of very hot material rises from deep in the Earth's interior and pushes up against the bottom of a rigid crustal plate. The top of a mantle plume may be 30 miles in diameter and while it does not melt through the crust, molten rock from it may flow up through cracks to the surface. At the surface the molten lava spills out to form flows that cool and become the rock we call basalt, or it may explode as clouds of gas, steam, and ash to from tuff deposits.

Each volcano is active for about 500,000 to 1,000,000 years. At first the volcano is a low mound on the deep ocean floor where molten lava seeps up through cracks. Gradually, the volcano is built up by later eruptions until its top rises above the sea surface to form an island. Eventually, as the movement of the underlying crustal plate carries the island volcano away from the top of the mantle plume, the volcano is cut off from its source and ceases activity. Then the island is slowly destroyed by weathering and erosion of its rocks. At the same time the cooling crustal plate slowly sinks underneath it. The volcano is gradually reduced to a low, flat island just barely above sea level and finally it becomes a completely submerged seamount called a gyote. (See illustration above)

As old islands are sunk, new ones are born to the west and so there are always some islands in the chain. The Galapagos Islands formed at least 8 million years ago, and the island chain may be much older. The oldest island still above sea level is at least 3.5 million years old.

Visitors to these islands notice that there are few species on the Galapagos archipelago. The geology of the islands, with the constant volcanic activity, creates a harsh, desert climate with very little rain and high temperatures so that only the higher slopes of the larger islands have enough rain to nourish a luxuriant growth of plants. This, in turn, results in an environment that is very hostile for most creatures that are found on the continent. Most of the islands are low and what little rain they get comes during a short rainy season, with the rest of the year being very dry. The amount of rain varies from one year to the next. 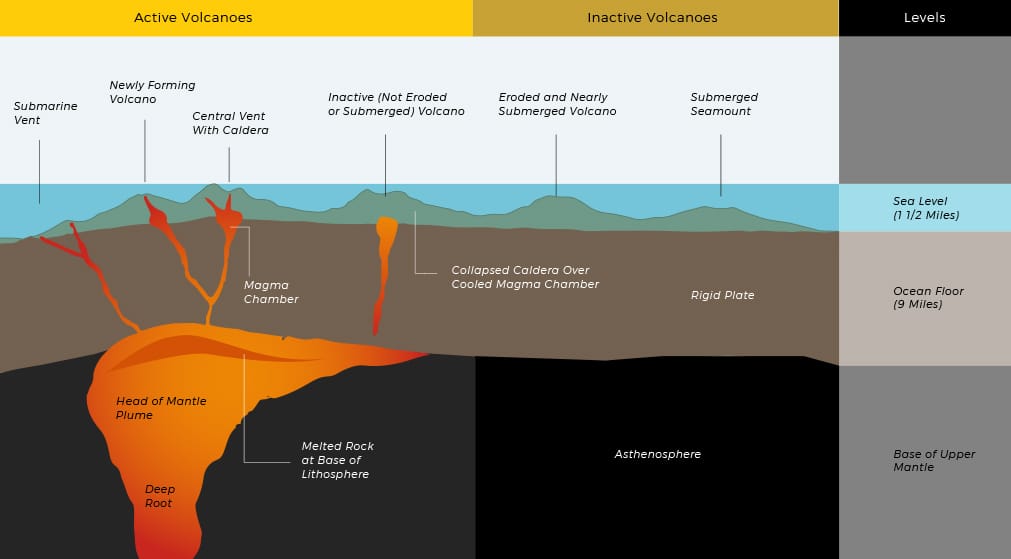