Flycatchers are small birds with large heads; short, broad-based, flat bills; and short legs. They have a rather erect posture and feed by making sallies from exposed perches to catch passing insects. The two species resident in Galapagos are readily identifiable.

Identification:
Smaller and daintier than Large-billed Flycatcher. ADULT MALE: Unmistakable, with brilliant red crown and underparts, black mask and upperparts. ADULT FEMALE AND JUVENILE: Brown above and yellow below, with a whitish supercilium and pale throat and chin; lacks wing-bars. The subspecies dubius differs from nanus in being slightly smaller and generally paler in all plumages

Behavior:
Typical flycatcher, chasing insects in the air and foraging on the ground.

New World warblers are small birds with short, thin, pointed bills. They inhabit vegetated areas and are generally very active, feeding by picking insects from the leaves or branches. The only resident species in Galápagos, the Yellow Warbler, is readily identified.

Identification:
Unmistakable; the only bright yellow passerine in Galapagos. ADULT MALE: Upperparts olive-green, with some yellow edgings on darker wings and tail; face and underparts golden-yellow, with faint chestnut streaking on breast and flanks. Crown has reddish- brown patch, variable in size. ADULT FEMALE: Lacks the crown patch of male, and has olive head and upperparts, grey breast and pale yellow belly. JUVENILE: Generally greyer than female but with traces of yellow in plumage. Commonly seen in a Galapagos cruise.

Behavior:
Feeds on insects, caught by hawking like a flycatcher or by picking them off the ground. 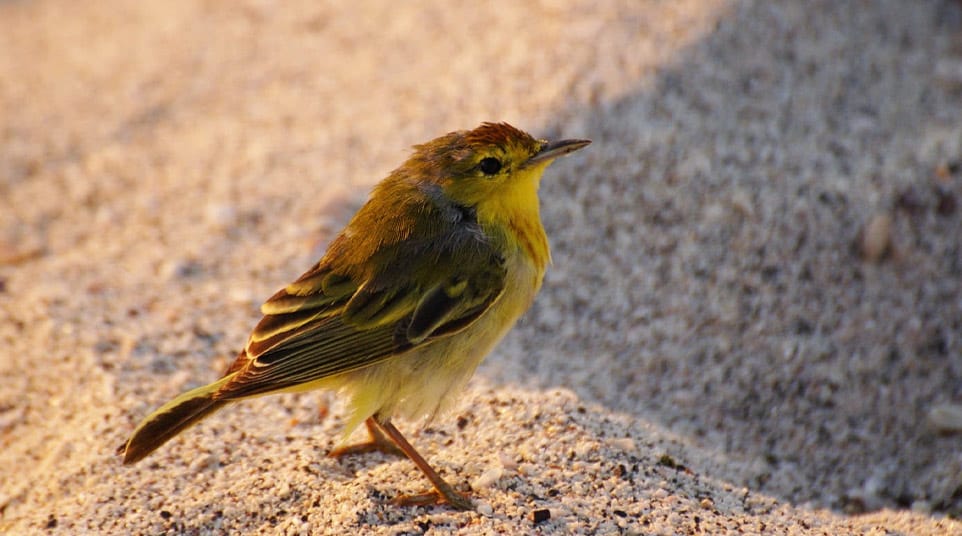