Category: Waterbirds
Six species of Rails and Crakes have been recorded in Galapagos: 3 resident species and 3 vagrant species. The only endemic species is the Galapagos Rail. Rails and crakes are small to medium-sized ground-dwelling birds with plump bodies; short tails, which are often held erect; short necks and bills; and long legs and toes (the feet are not webbed). They are generally rather furtive, mainly inhabiting marshy areas and are usually reluctant to fly. They are good swimmers. The sexes are alike in all species.

The Paint-billed Crake is a scarce resident of Galapagos, found principally in agricultural areas, favoring dense, wetland vegetation. However, it is also found in damp woodlands and in dry pastures and thickets. Breeds from November to February.

Identification:
A small, rather dark mil. ADULT: Upper parts olive-brown; under parts slate-gray with narrow white vertical bars on flanks. The bill is pale green with bright red base and black tip; legs and feet are red. JUVENILE: Similar to adult but plumage generally duller and paler with dark bill lacking the red base.

Voice:
Song is a long, descending and gradually accelerating series of staccato notes followed by a few short churrs. Call is a fro-like "qurrk", either given singly or in a series. 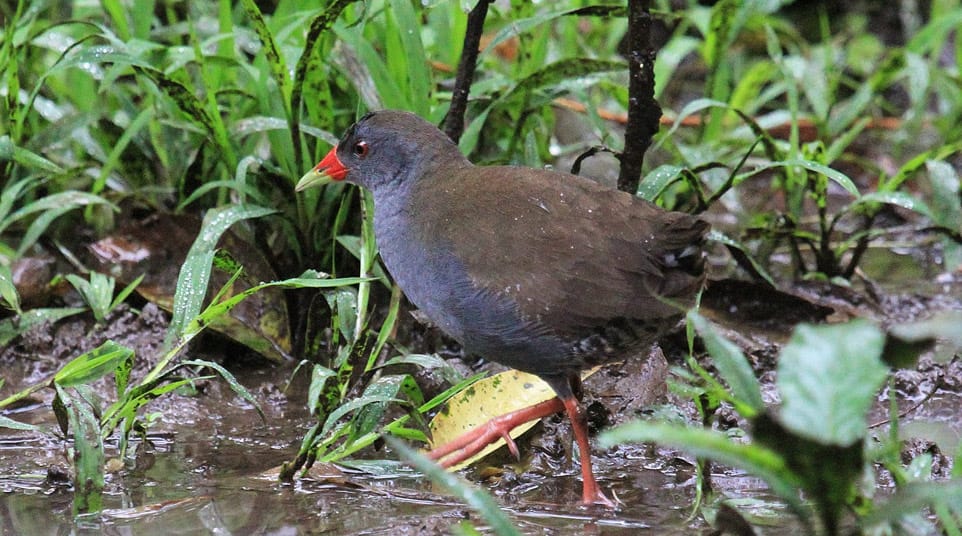