Frigatebirds are large, dark seabirds with very long, pointed wings which are held forward from the shoulder in flight. They have deeply forked tails and short legs with webbed feet. Their bills are long and hook-tipped. Frigatebirds soar high over the sea and feed by harassing and kleptoparasiting other seabirds, particularly boobies, or by picking food from the surface of the sea. However, they never land on water as they lack the oil-secreting gland which keeps the feathers of seabirds dry. The male, female and immature plumages are distinctly different and breeding males have a bright red gular pouch which is inflated during display.

Specific Description:
Resident of Galapagos. Population is estimated at a few thosand pairs in about 12 colonies. Breeds throughout the year.

Identification:
A large, dark, long-winged seabird with rakish flight and long, deeply forked tail. Slightly smaller than very similar Magnificent Frigatebird which is the only likely confusion species. ADULT MALE: Wholly black (apart from red gular sac); green sheen to mantle feathers, and red or reddish-brown legs and feet. In flight it is very difficult to distinguish from the Magnificent Frigatebird, although it usually shows a pale bar across the upperwing. ADULT FEMALE: Similar to male but breast and throat are white. Can be distinguished by red or pink eye-ring. In flight it is very similar to Magnificent Frigatebird but throat is white breast and does not show white markings on axillaries. JUVENILE: Resembles female but the head as well as breast are usually washed pale orange or tawny. However, white–headed juveniles sometimes occur and are inseparable from juvenile Magnificent Frigatebirds.

Note:
Silent at sea, but male makes a continuous rattling call when displaying at the breeding colony.

Voice:
Since birds do not reach maturity until their fourth year, gradually developing adult plumage during this period, a series of intermediate plumages occur, often making separation from Magnificent Frigatebird all the more difficult.

Behavior:
A rather more pelagic species than the Magnificent Frigatebird, generally only being seen near land in the vicinity of the breeding colonies (which tend to be on the outer islands of Galapagos, principally Tower or Genovesa Island). Feeds mainly by picking food from the surface although, like the Magnificent, regularly kleptoparasites other seabirds. When displaying, males inflate their bright red gular sac like a balloon and call to attract females, at the same time vibrating their outstretched wings. 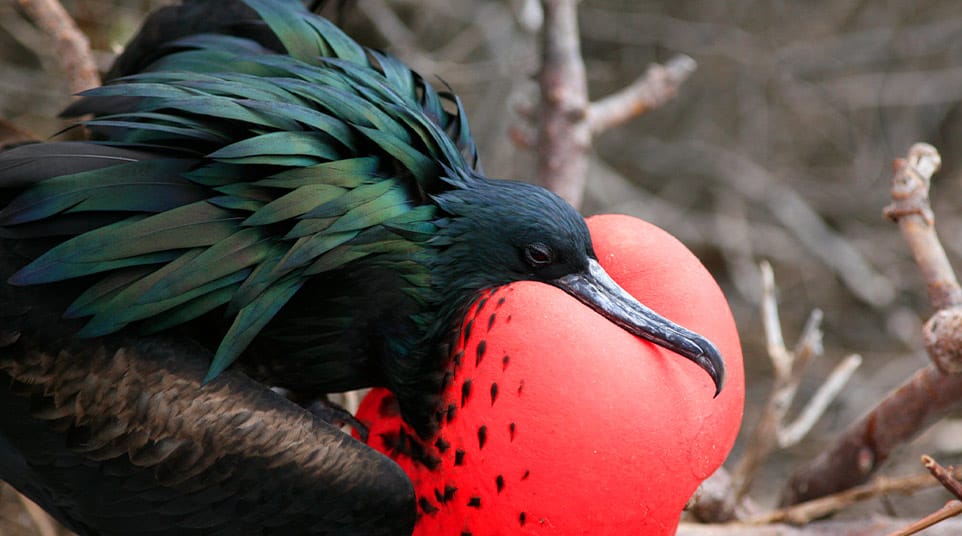